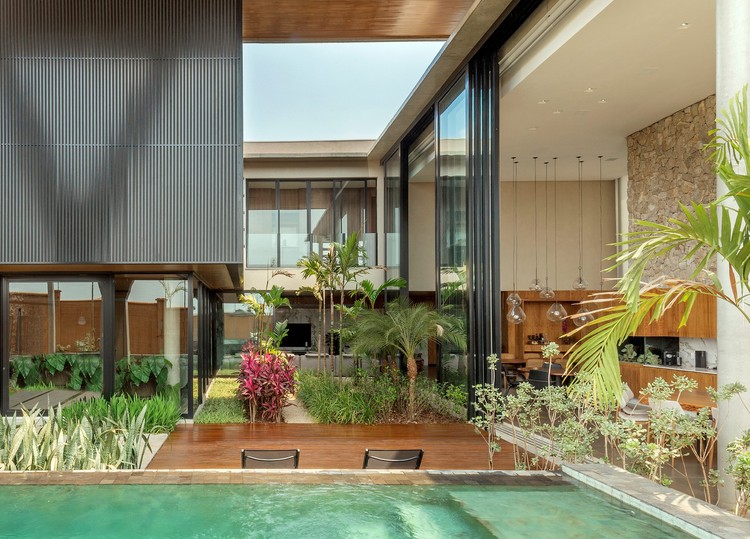 “Surprise me with a house” was the client's demand. The family: a father and two grown children. Three music lovers. His desire was to have a functional house and, at the same time, different from anything seen inside the residential condominium where he would be.

Given the mission, the idea of ​​a striking element emerges, the robust Y-pillar. In keeping with the requirement, the architecture office sought to create an unconventional project: a house without an entrance door, with a swimming pool in front, and the landscaping integrated into many of the rooms.

A way to provide greater convenience and integration between the spaces that would be inhabited by the father and his two children in their youth. The volume of the house is characterized by the linear façade and the large entrance patio, in addition, of course, to the imposing Y. In the gourmet area, double-height ceilings. Inside, the rooms were arranged so that the highlight is the living room, which contains the piano as a central element. When it's playing, the resident has a privileged and full view of the house's floor plan.

A perfect place to receive friends and, above all, carry out cultural programs, such as the music soirées, so valued by the residents. The music studio is in the basement, on the same floor as the garage, where there is also a small bar. The office prioritized bringing natural lighting and a view of the gardens to the interior, as residents are used to receiving it. Herein lies the importance of socializing areas. Timeless elements bring pleasant visibility to the use of natural stone, exposed concrete, and wood in the external pergola, deck, and lining in the living room ceiling and in the pizza house space.

Such natural elements, such as wood, stone, and concrete, bring a noble and, at the same time, cozy appearance to the house. Definitely an escape from the obvious. Casa Z fulfills the initial desire of the owner and the architects: it is functional, practical, inviting, and, of course, surprising.