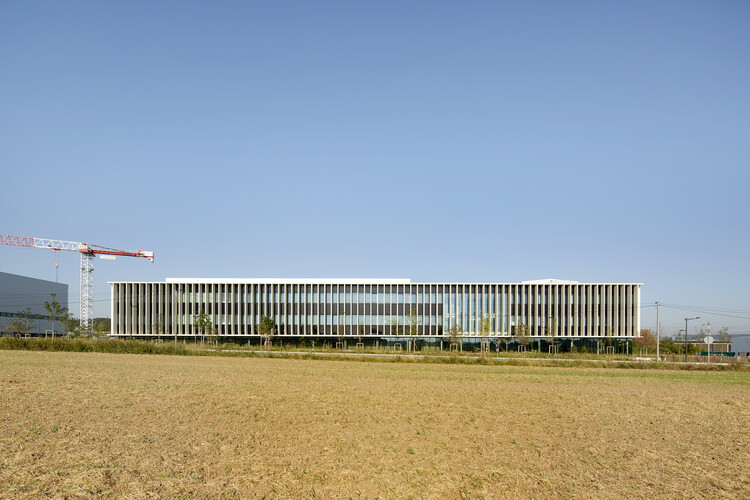 Text description provided by the architects. The order for Les Maçons Parisiens headquarters came to us eight years ago. It came about in a climate of trust, after successful collaborations with this construction company. The project is located on the edge of the city, on the edge of the great agricultural landscape. It represents one of the components of the new Massy-Europe eco-district, a new generation business park, ambitious and demanding in terms of sustainable development.

In addition to the functional nature of the project, which consists of providing the company with a high-performance work tool, including offices and production workshops, the aim was to develop an attractive, user-friendly, unifying project, which encourages pleasure in working, both alone and as part of a team.

The office building, the company's showcase, has two faces:
- on the streets, to the north and east, the thick urban façade, punctuated by high spines of white concrete, expresses the grid. It filters and keeps the offices at a distance.
- In the heart of the block, the south and west facades are largely glazed and protected by adjustable sun breakers, opening onto a garden and the crèche.

Inside, the program unfolds in two wings arranged at right angles to each other, linked at the corner by the hall and its large staircase with double-crossed flights. The latter irrigates the building around a void on three levels.

In each wing, the offices are spread out on either side of an atrium street, punctuated by voids, levitating meeting rooms, and relaxation areas. These circulations, deliberately oversized and generous, function like a city square, both a service and a meeting place. The conviviality is reinforced by the presence of the ash tree, which acts as Ariadne's thread.

To the west, the crèche, which is managed independently and accessible to the neighborhood, fits smoothly into the garden and dialogues with the offices. In its southern part, the workshops and the storage area complete the program on the site. A workshop life, inside and outside, echoes the neighboring activities.

On the façade, the project uses three materials: white concrete, silver anodized aluminum and glass, and black or transparent enamel.

White concrete is self-compacting, initially very liquid, it is not vibrated. This process makes it possible to obtain smooth surfaces from the outset, which do not require any subsequent finishing. Several quarries are used to obtain this white cement. The Maçons Parisiens produce all the concrete works themselves, both grey and white, cast in situ or prefabricated in their workshop.

Inside, the concrete and white plaster interact with the glass of the railings and partitions, and the ash, deployed in the form of acoustic panels, wood strips, and furniture. Ash is ideal for acoustic treatment. The overpressure interior space reduces dust deposits.

This building echoes a covered, airy and comfortable urban layout, open to the landscape, while retaining a degree of intimacy around its garden, distributing access to as many semi-transparent, floating meeting rooms resembling "cabins": inside and outside acting in dichotomy, dynamic circulation, generous and luminous spaces. 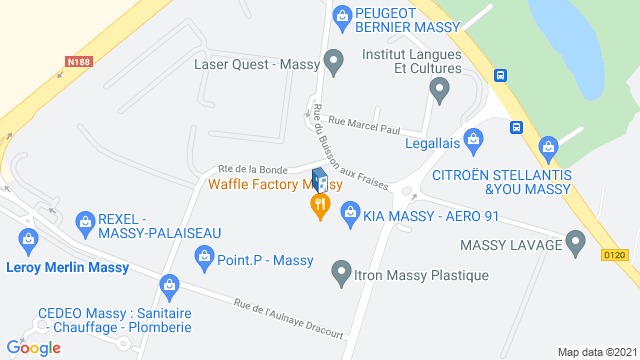