"From your eyes to my eyes" is a project that was born from the idea of involving the people who follow me in magazines and on social media in my photo reports; inviting them to send me their favorite architectural places, the ones they carry within themselves, in their eyes.

A "bird's eye" view of the world. A great variety of types, functions, geographical contexts and emotions, different but also with subtle affinities and possible relationships.

And this is how, from a program of places proposed by hundreds of people, together with Nicola Carofiglio and Giuseppe Tupputi, the idea of intertwining two distant stories was born, that of Hans Van der Laan's Vaals abbey in Holland and that of an abusive church built in Puglia in the informal settlement of Torre Mileto.

A long journey from Holland to Puglia, from the north to the south of Europe, through our eyes.

After Aldo Amoretti told us he would have selected our proposals, he suggested this — apparently impossible — comparison. Two architectures that are really distant in their aims and results, beside their mere ritual function. We welcomed the intuition of his gaze, then we started questioning what we thought it could have been the only possible ground of comparison: the conscious or accidental search for a spatial ‘zero grade’, the elementary gestures building these spaces, the clarity of the relationship between sign and meaning.

We defined the trajectories, then we developed these reflections within a dense three-voiced-six-eyed exchange, combining words and images. We accompanied Aldo, remotely and then physically, to the places we suggested, describing our ideas and interpretations and sharing his new suggestions. Starting from two opposite points of view, this photographic and textual report tells about the sacred construction of space trough the smallest amount of gestures and components, tending to the primitive, the essential. Hans Van der Laan’s work is the result of theoretical awareness and a continuous rational search for the archetype, whilst the illegally built church in Torre Mileto is the outcome of a spontaneous necessity, distant from any form of abstract thinking.

The monk-architect Hans Van der Laan designed a church, a guest wing and a library for St. Benedictusberg abbey in Vaals (NL), between 1961 and 1986. Here he moved and dedicated the rest of his life to build this lime washed brick demonstration of his theories on the architectonic space. The extension of the old monastery (designed by Domikus Böhm) establishes a rediscovered relationship with the surrounding green hills and the dense vegetation of the Kolmonder Bosch. An enclosure made of trees hems the forest and imposes a new order to the landscape. It mediates the boundless nature, ‘makes space’ for the architecture of the abbey. It is a piece of built nature. Similarly, wall masses separate the limited human space from the limitless natural space; they tame this nature, they close and disclose themselves to it: southward a platform bounded on three sides overlooks the upland, eastward the big communal courtyard reveals the landscape trough the openings of the portico. Here you can sight the vastness of the landscape protected by the walls of the courtyard. Within the heart of this dense sequence of spaces, the narrow atrium links the volumes of the church, the guest wing and the existing convent. Surrounded by pillars as tall as trees, this courtyard cuts a piece of sky out — like a clearing in the wood.

The rectangular body formed by the church and the atrium wedges into an arm of the original building, along the slope. The liturgical hall and the surrounding galleries are imagined as a system of enclosures protecting the nucleus “full with space”1, where rites happen. The double height library building lies transversally to the church. A L-shaped gallery and the portico complete the general layout and close the cloistered figure of the first monastic plan.

The ‘sacred’ construction of this sacred space takes place only with the elementary gesture of enclosing: creating an ‘inside’ in relation to the ‘outside’2. These ‘inside’ spaces, or spaces of the human experience, are shaped by life flowing: working, walking, contemplating. Three proportional boundaries correspond to these actions; the monk-architect calls them “cell”, “court” and “domain”. Walls shape and make spaces visible. Their thickness measures these spaces and proportionally links them, like a yardstick, according to the so-called “plastic number” proportional system. The lime washed paint partially covers the tectonic qualities of these walls, thus enabling the viewer to focus of their value of unit and plane. Walls become perceptive boundaries wherein bodies move, with no material distractions.

Hans Van der Laan’s language restraint — both for St. Benedictusberg abbey and for its (laic and religious) furniture — is not an ‘a posteriori’ process of abstraction nor the result of a severe benedictine simplicity. The minimal gestures with which these spaces manifest are part of his continuous rational search for the archetype, the elementary. He is a conscious “primitive”3 searching for the original essence of things, empirically observing the world and trying to understand the natural rules of inhabiting.
Nicola Carofiglio

Torre Mileto is a sprawled seaside suburb on the isthmus separating Lesina Lake from the Adriatic Sea, on the stretch of Apulian coast that faces Tremiti Islands.

Full of life during the summer months, similar to a ghost town in winter, over the time this place has welcomed a community that, albeit informally and illegitimately, has tried to give instinctive answers to the most basic needs of dwelling.
In this context, the illegal construction of a church or the raising of a cross among the dunes are interesting acts not only because they prove the essential need for sacred spaces, but above all because they show a spontaneous, authentic and savage way of approaching the theme of the sacred construction of space.

On one hand, in fact, the most dramatic and heinous decompositions of a disjointed and ungrammatical building appear evidently. On the other hand, by digging into this barbarism "without hoping to keep your hands clean", it is also possible to find "unexpected and imperfect gems"4, recognizing the sincerest needs of a sacred space where everything is aimed at reducing gestures and constructive effort to a minimum.

The church of Torre Mileto was built a few decades ago but was already born in the form of ruins. It seems to resurface like a fossil from the sand: like a petrified fragment of the bone structure of an extinct marine animal. Always threatened by the movement of the dunes that could entirely or partially swallow it, the metaphor of the fossil precisely expresses the sense of the relationship between this church and the coastal landscape.

The hexagonal volume of the presbytery – the head of the fossil – preserves the only portion of space that can be defined as an interior.

The hall – in which the concrete seats emerge like ribs from the ground – is not a delimited space, but a circumscribed and at the same time open place, which is oriented towards the marine horizon and immersed in the natural landscape.

The space of the presbyterial sacellum is constructed through a few elementary acts: delimiting, covering, elevating and looking through. Some elements correspond to these acts: the sidewalls, the roof, the basement and the cross-shaped window that frames the sea.

There is no design of the tectonic order of the construction but there is the feeble and authentic need for certain conceptual and constructive relationships in assembling the prefabricated components. For instance, since the gesture of delimiting is distinct from that of covering, the roof is separated from the side walls. Through the hiatus between these elements, light penetrates as an unexpected decorative device, projecting itself on the walls in some hours of the day.

Besides being oriented towards the sea, the space of the hall is symbolically traced on the right side by a row of concrete blocks laid on the ground. Although far from possessing a spatial meaning, this gesture is not a mere representation of the concept of limit: with a closer look, the hall is imprinted on the earth's surface by those few centimeters necessary to root the space to the place, in order to obtain the small slope necessary to improve the visibility of the central nave. Conversely, on the opposite side, there is no boundary, but a direct continuity with the wild grassland dotted with shrubs, which participates in the construction of the spatial atmosphere of the church. During the rite, when people are standing, there is no limitation to their gaze, which is immersed in the "free vastness" of the natural landscape, but when they are seated, the spatiality offered by the gathering of the elements in the "locality" of their mutual coexistence5 is perceived more clearly.

Stopped at an instinctive level, not mediated by any form of abstract thinking but exclusively deduced from experience, this proto-architecture lacks compositional principles, eurythmy, proportion and symmetry. On the other hand, the essentiality of spatial intentions and a thrifty construction and use of materials have spontaneously produced a certain economy of form, which distinguishes the arrangement, or rather the distribution and the decorum6.

Therefore, in the spontaneous church of Torre Mileto, there is an unconscious search for the zero degree of the construction of space, on which largely depends its suggestive character that is familiar but unprecedented, informal and yet sacred. Nevertheless, in the absence of designed proportional and syntactic relationships, the semantic density contained in this spontaneity is condemned to remain imprisoned in the prelinguistic groan of an aphonic construction, almost completely incapable of expression.
Giuseppe Tupputi 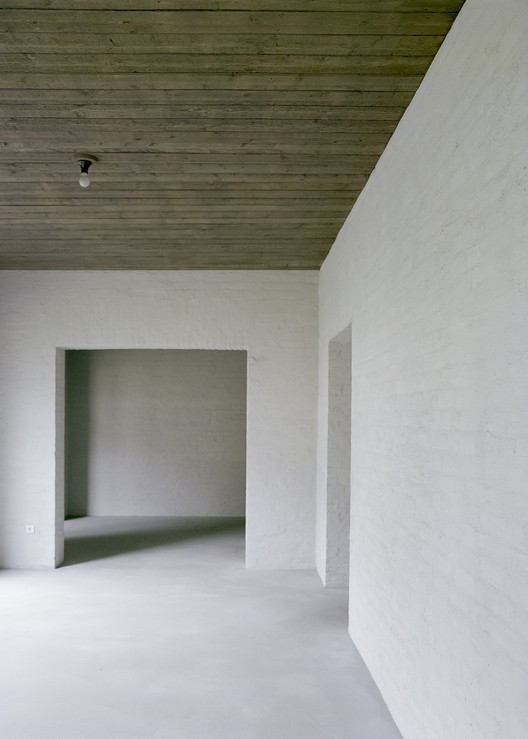