David Adjaye was announced as the lead designer of the Barbados Heritage District, dedicated to documenting and recounting the impact of slavery on Barbados as well as cultures and nations in the Western hemisphere. The project will comprise a memorial, a museum and a research institute, the latter in charge of presenting Barbados’s pivotal role within the slave trade history as the place of departure for millions of enslaved Africans towards the Americas. The Heritage District, whose announcement closely follows Barbados’ transition to a parliamentary republic, marks a cornerstone in the development of the country’s identity more than five decades after declaring its independence from Britain.

Set to be located in Newton Plantation, outside of capital city Bridgetown, the project will break ground on November 30th 2022, marking Barbados’ first anniversary as a parliamentary republic. The first phase of the development will see the construction of the Newton Enslaved Burial Ground Memorial, adjacent to the burial ground of 570 West African slaves, a monument to the nation’s ancestors and a space centred around notions of renewal and rebirth.

The memorial features a red laterite earth dome-shaped entrance pavilion, where visitors will be presented with information about the burial ground and the slave trade before accessing the monument on an ascending ramp. A sugarcane field flanks the southern entry point, and at the highest end of the sloped site, the memorial culminates in a rammed earth circular mound. Within the memorial space, 570 individual timber beams capped with circular brass plates and arranged in a square commemorate the enslaved people buried on site.

Drawing upon the technique and philosophy of traditional African tombs, prayer sites and pyramids, the memorial is conceived as a space that contemporaneously honours the dead, edifies the living, and manifests a new diasporic future for Black civilization that is both of the African continent and distinct from it. – David Adjaye

Additionally, the research institute will become the first resource centre of global stature in the Caribbean dedicated to exploring the history of slavery and its impact, basing its work in the Barbados Archives, a collection of tens of millions of documents that trace the story of the Trans-Atlantic Slave Trade. At the same time, the development of the Heritage District is expected to create new economic opportunities within the technology, new industries and construction sectors. 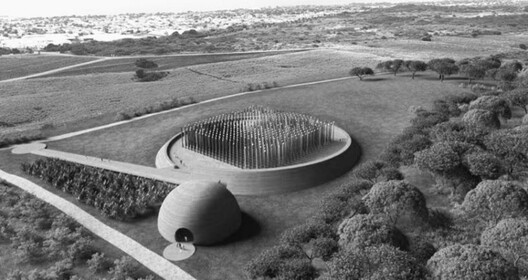