Save
With Joy Homestay NO.10 Courtyard / UPA 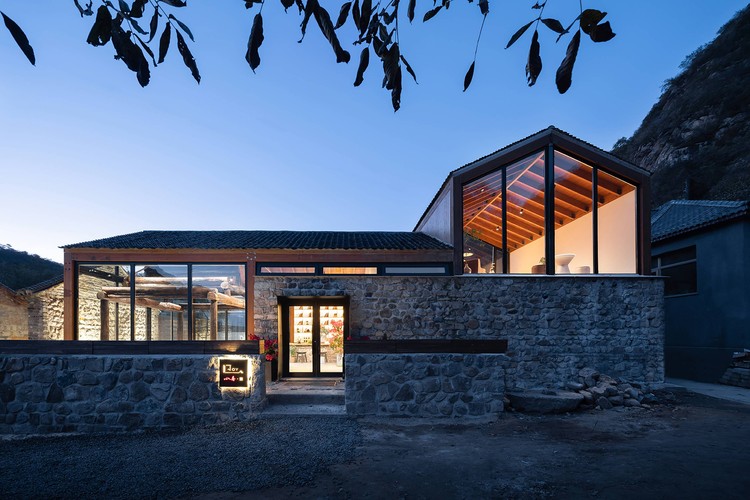 Text description provided by the architects. With Joy Homestay NO. 10 Courtyard is located at Erdaoguan, Jiudu River Town, Huairou District, Beijing, which is approximately six kilometers away from Huanghuacheng Water Great Wall. The Erdaoguan Great Wall was built in Southern Song Dynasty and it is an important part of the Great Wall in Beijing. This ancient Great Wall passes all through the village, and beacon towers and ruins of city walls can be seen everywhere.

With Joy Homestay is a series of homestays scattered among the villages of Erdaoguan. The No. 10 courtyard, No. 9 courtyard on the west side (which is also designated by the United Practice Architects), and No. 8 courtyard on the south side form a small cluster. The rectangular site of the No. 10 Courtyard is not large. The former two L-shaped residential buildings have already been dilapidated and withered for a long. The old house is constructed with a brick-wood structure, as a common dwelling structure type in northern China for nearly a hundred years. The client hopes to transform it into a public restaurant and two guest rooms, and the public restaurant is open for all guests in With Joy Homestay with a capacity of 30 people. How to deal with the constraints in the site and the relationship between public and private spaces have become our prior considerations.

When we first visited the site, we were attracted and interested in the heavy post-and-lintel wooden structure of the old house and the dilapidated gable walls on it. All of the mare just telling the history in silence. What also surprised us is that observing from the courtyard, the Great Wall winds up and down on the mountains and a section of the city wall even appears on the west side of No. 9 Courtyard. The ancient wall here is not only a great scenery seen from far away, but also a historical relic that can be approached and touched. How to live with these historical relics becomes a task that has been discussed between the client team and us over and over again.

No. 10 Courtyard was renovated based on the original homestead. The east side was rebuilt into the restaurant, and the north side was rebuilt into a residential area. These two directions of structures connect the house to a whole. The northeast corner of the restaurant is raised to be a two-level space, which is used as a multi-functional room with an observing space for distant scenery. The courtyard is divided into two places, the courtyard on the east side is long and narrow as an entrance, emphasizing the attribution of transportation. A large pool is located in the west courtyard for rest. The pool is interspersed with a circular tree pool, a stage, and a sunken rest area, which echoes the idea used in window holes and bubble pools in the No. 9 courtyard. Also, a walkway and a pavilion are arranged outside the pool in order to form a diverse and interesting space, allowing everyone to find their own quiet space.

The restaurant adopts a glulam structure, which keeps the "light" rural construction as what UPA always advocates, that is adopting a light structure to intervene the rural construction. Here a wooden frame of the old house is kept inside the restaurant. The old wooden frame and new glulam structure coexist as tradition and modernity meet, which creates a strong contrast. On the outside of the restaurant, the gable on the southeast side was restored, making it stand in the original position but in a fragmented way, which gives a special tension to the space. The east and north exterior walls of the restaurant use masonry to continue the original material choice of the old house, which can also be a contrast to the lightness of the glulam structure.

The residential area also keeps the wooden structures of the old house, and the south side is expanded with steel structure to figure out the problem of insufficient depth. The expanded tatami space is facing the pool in the near and mountains in distance, perfectly forming a great frame of scenery. The wood slats extend from indoor to outdoor, and it also forms a continuous interface with the exterior wall panels of the restaurant.

The construction of the No. 10 Courtyard has gone for a long run-in period. On the one hand, the localized construction is made by the construction team composed of local villagers; On the other hand, the factory prefabrication and on-site assembly of glulam also face some difficulties. The two forces are intertwined with each other, and various difficulties continue until they are finely balanced. When the building was completed, we saw the old gable, old wooden frame and new wooden frame alternately appear in the restaurant, they created an effect just like a movie montage. The past and the present, indoor and outdoor have created a new connection and integrated into daily life. 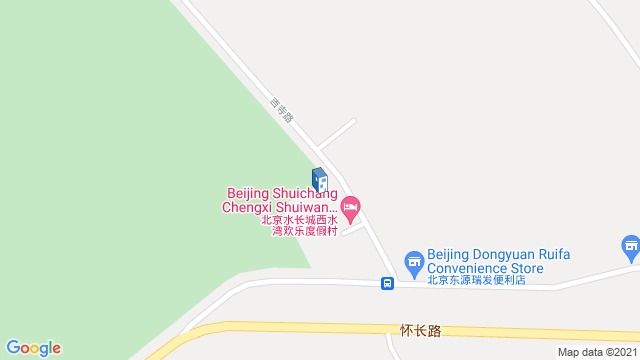 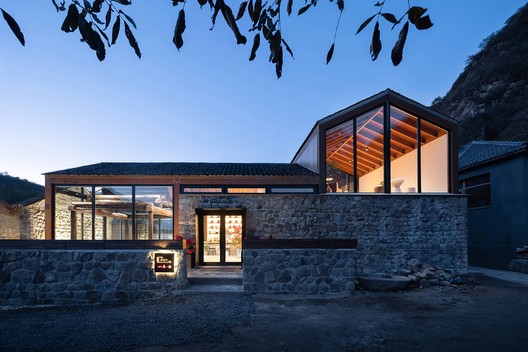