Save
Harbor Hideaway / The Up Studio 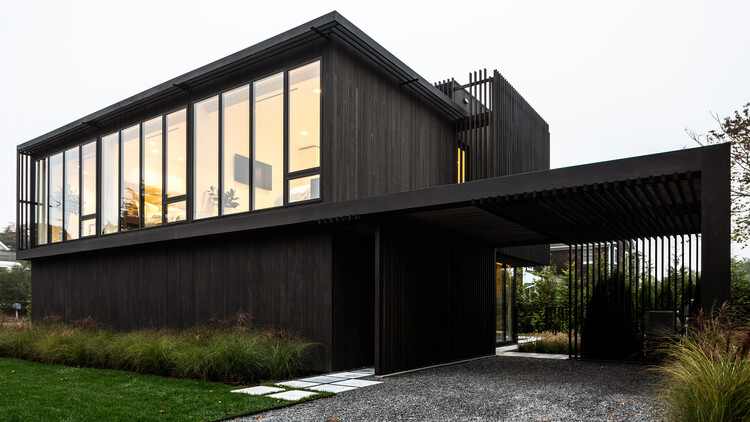 Text description provided by the architects. Located in the centuries-old whaling village of Sag Harbor, NY, Harbor Hideaway is a single-family two-story residence. The property is situated in the center of a small peninsula and is one of the only lots in the neighborhood without direct water views. Although the instinct would be to design a new house to face the street, The Up Studio flipped the traditional orientation of the home to face the rear corner of the yard. This design decision created privacy from the street corner, immersed the family in greenery, and reclaimed previously obstructed water views.

The home was nearing completion in 2020 as New York experienced a major shift towards remote work, which made many seasonal neighborhoods like these more desirable for full-time residents seeking relief from congested city life. Although the homeowners initially hired The Up Studio to design a custom home specifically for their family, the increase in demand from homebuyers in the area led them to list the house prior to moving in.

The home was quickly sold just after completion and both the new owners and the original family have continued to work with The Up Studio. The entire home utilizes a simple material palette of blackened steel, light hardwood, and neutral colors. These material and fixture selections provide a subtle sophistication and allow the property's surrounding natural elements to organically provide a pop of color. At entry, the custom wood stair design connects the three interior levels of the home with a single gesture and provides a sense of openness that makes the home's modest footprint feel much larger.

The home's rhythmic, black cedar facade wraps the entire home to naturally shade the south-facing bedrooms from the high summer sun and becomes a visual connection between the home and the carport, creating a covered entry in its path. The first-floor facade was designed to act as a subtle privacy screen from the street, while the rear of the home is fully glazed on both levels with custom Marvin Modern windows to create a strong connection between the home’s interiors, the property’s natural landscape, and the spectacular views of the nearby harbors.

The Up Studio
Office
•••