EU Pavilion, a research practice exploring the relationship between architecture and European institutions, presents eight proposals for the first European Pavilion at the Venice Biennale. European architectural and artistic practices were invited by curators Anna Livia Friel, Marco Provinciali, Benjamin Gallegos Gabilondo, Nicolò Ornaghi and Francesco Zorzi to reimagine the national pavilion, the defining spatial and symbolic paradigm of the Biennale. The speculative project aims to explore architecture’s potential in supporting the European project and helping define the identity of this culturally diverse transnational organization. 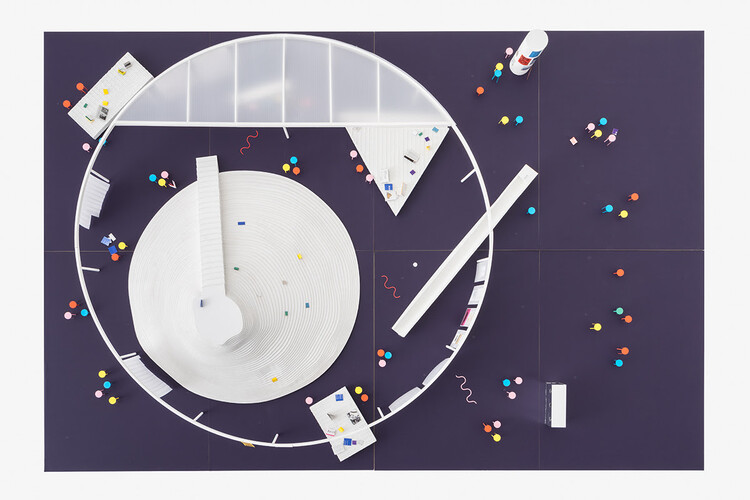 Armature Globale, BB (Alessandro Bava and Fabrizio Ballabio) in collaboration with Tomaso De Luca, Jasmina Cibic, Diogo Passarinho Studio, Plan Común, Something Fantastic, TEN and Evita Vasiljeva were the eight designers to present their proposals as 1:20 models. The projects illustrate a variety of approaches to the pavilion typology as “an ideal testing ground for a new kind of European public building.” Among the designs are a shipping-container-like structure expressing the regulatory and standardizing aspect of the EU, a water-centred design as a commentary on Europe’s colonial past, as well as a stage for the underrepresented or re-readings of EU’s identity symbols.

The project for the European Pavilion provided an opportunity for asking what new representative languages are ​​needed for defining the identity of a supranational organization in a state of continuous crisis and perpetual construction like the European Union. In the light of the current debate around the strengthening of the European integration, a reconsideration of the spaces where this process happens is of critical importance for the definition of a democratic and inclusive public realm. – EU Pavillion

2021 Venice Biennale Comes to an End with New Themes, Materials, and Responses to Global Challenges

Established in 2018, the research laboratory EU Pavilion brings together architects, designers, scholars and photographers, whose work spans public events, academic activities and publications. The Eight Proposals initiative was developed with the support of the European Cultural Foundation.