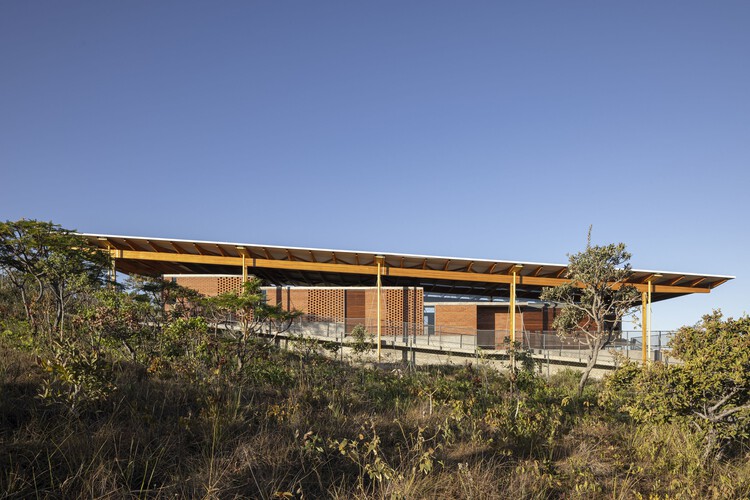 Text description provided by the architects. The Palicourea House is located in a rural area in the village of São Jorge, municipality of Alto Paraíso de Goiás, directly on a small hill in front of São Miguel river valley, close to the limits of Chapada dos Veadeiros National Park, inserted in the country’s second-largest biome, the Cerrado, which covers more than 772,000 square miles, nearly a quarter of Brazil. The Cerrado is the world’s most biodiverse tropical savanna. Thus, the whole project is an experiment about a way to inhabit the region, considering the specificities of the program and its context as well as the possibilities of a sustainable and positive coexistence between humans and nature.

The Palicourea House consists of two buildings: a house and a small studio. One of the family members is a landscape architect who works with native species from the Cerrado, aiming for the preservation and recovery of species from the region’s biome. The studio is her home office and it will also host artistic and educational activities related to her work. Each of the buildings is located on one side of the hill, separated from its highest point, 120 meters apart from each other. The internal spaces were placed at different levels and adapted to the existing topography, slightly suspended from the ground to prevent the entry of small wild animals, to minimize land movement, and to preserve as much of the existing trees and herbaceous vegetation as possible. A system of stairs and ramps connect the house’s internal and external levels. In the studio, the stairs that connect the internal and external levels are transformed into an open-air grandstand.

The structural system of both buildings is composed of two parts that were built independently: the exposed concrete structure and solid brick walls – the “core”- and the glued laminated wood (Glulam) roof. The aim was to combine local labor and traditional building materials with a large lightweight structure made from reforestation wood, remotely prefabricated, and assembled on site. The concrete and brick core follows a grid that allows for irregular variations in internal dimensions for the distribution of the program. Some parts of the fixed furniture were added to its own structure (such as shelves, grandstand and cabinets of the studio and kitchen, exterior stove, and internal bench of the house). The wooden roof follows a regular structural pattern. The two parts of each of the buildings are structurally independent so that it was not necessary to obtain a high level of precision in the local phase of the construction to obtain the perfect “fit” between them.

The bedroom, home office, and bathroom areas in both buildings were treated as an “extended stay area” and were covered with solid concrete slabs that delimit an “air mattress” between them and the wooden roof. This empty area is also an open and naturally ventilated space that promotes greater thermal comfort for the internal spaces right below them, providing space for the distribution of most installations and equipment. The social living spaces, such as the living room of the house and the studio lounge, are equipped with large, glazed areas, sliding window frames, bug screens, and wooden sliding louvers that allow for constant natural ventilation and light. Therefore, these spaces are also the only internal rooms where the wooden roof is also the roof of the indoor environment.

The buildings are equipped with “E.S.S.” photovoltaic energy systems, which means that it works as an “off-grid” system that is also connected to the supply network. This way, when the batteries are charged and when the user loads are supplied, it “returns” the excess energy to the network. The roofs of the buildings have a single slope that follows the general topography of each side of the hill. They are interrupted by lines of gutters to collect rainwater. This water is filtered and stored in small tanks at the lowest points of the lot to be periodically pumped by pumps powered by photovoltaic energy to a central reservoir located at the highest point of the lot with the storage capacity of 40.000 liters of rainwater. The Cerrado is limited to two dominant seasons throughout the year, wet and dry. Therefore, the idea is to use rainwater to minimize the use of water from the public supply system throughout the year, mainly during the dry season. Sewage from sanitary basins and kitchen sinks is processed and treated in underground eco-stubs before passing to the soil infiltration tanks.

The Glulam roofs do not directly touch the concrete and masonry structural core of the buildings. However, both structures are connected through big fixed glass panels that are part of the windows and doors of the house´s living room and the studio´s working space. For this reason, it was essential that the complete stability of the wooden structure was guaranteed against eventual deformations and movements that could be caused by winds. Therefore, the structure rests on triangular foundation blocks where the pillars and their stabilization tie- rods are anchored. These blocks also receive rainwater from the gutters and have different levels of implantation adapted to the natural stretches of the topography where the studio and the house were built. Therefore, each of the 16 wooden pillars of the two buildings (10 pillars in the house and 6 pillars in the studio) have different lengths. 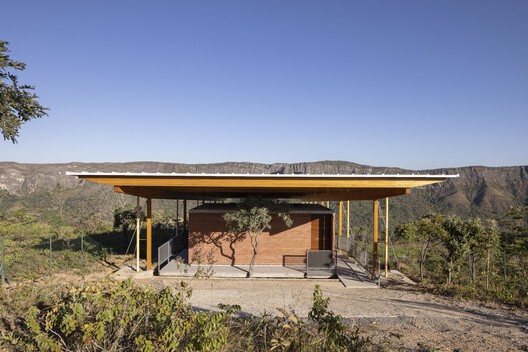