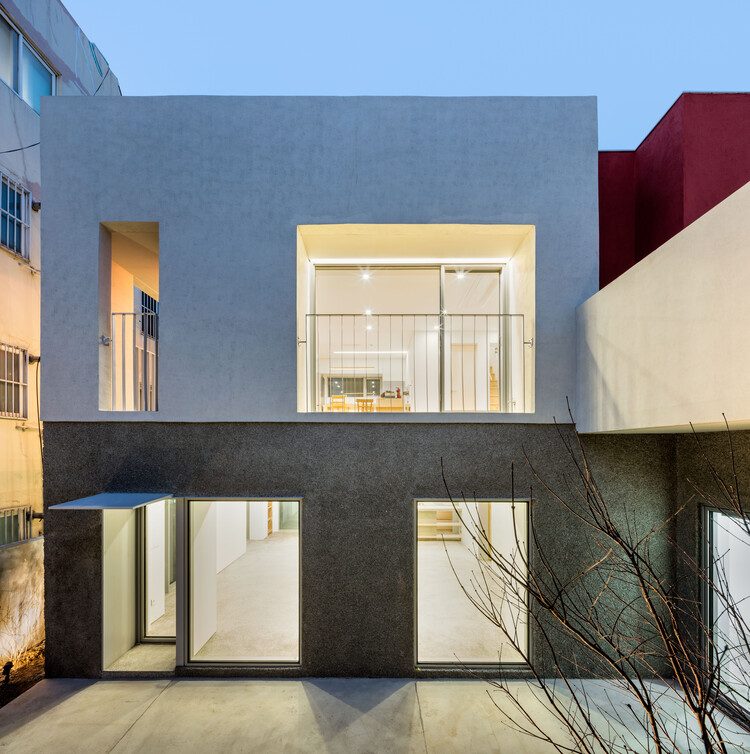 “The library house is reached through a 30-meter dead-end alley. The existence of this narrow and long alley alone seems to remind someone of romance and curiosity, and someone of unpredictable difficulties. The angle that the site can give is limited, so the picture does not show the solid library house sitting with the yard. As you inadvertently walk along the quietly open gate, the gradual experience of encountering a library house unexpectedly is real.“

Urban regeneration, renovation, old buildings in blind spots -  It is a work that has been contemplated and challenged for a long time for a fundamental rebirth rather than a temporary measure for 'old buildings in blind spots' that have been left in various places in the city without being able to change and solve due to the current building laws and parking lot laws. The new programs – Library with a single-family house- are accommodated under conditions such as the land sitting at the end narrow alley, a 30-years-old cement brick building, the ground under subsidence, the land that cannot be built newly, and adjacent buildings on all sides.

Concrete Tectonic - Structural consideration were important in the plan to renew the existing building, which had begun to subside. For this, ‘Active application and variation of material properties of the concrete’ is applied consistently throughout the work to reveal the architectural theme. Concrete is not only a constructive solution and logic for foundation and structures, but also constitutes floors and finishes in texture, and interior spaces, and furniture. The project ‘Concrete Library’ can be represented as ‘Concrete Tectonic’.

The new concrete reconstructs an existing building which is 30 years old by enclosing it from the foundation. In other words, the ‘old brick masonry wall’ serves as formworks for the ‘new concrete wall’. The thickness of the physical combined wall(600mm) that creates a deep volume and shadow is the thickness of the previous time of 30 years. On the other hand, as if different times face each other, the ‘old brick wall’ and ‘new concrete wall’, which exist with a gap, form a new space such as a buffer and a terrace.

The exterior of the old wall was painted red so that the old time and the new time could be distinguished and recognized. The most important meaning of the 'Concrete Library' renovation project is to approach the ‘old cement brick building' commonly produced in the 60-80's with a new perspective and method. Deciding on the direction of the permanent ‘concrete-wet method’ rather than the ‘dry method(steel frame reinforcement + exterior replacement)’ of ‘minimum access’, which is usually applied to small buildings, it was planned to be the structure, exterior, spaces, material, texture, and story of the concrete itself.