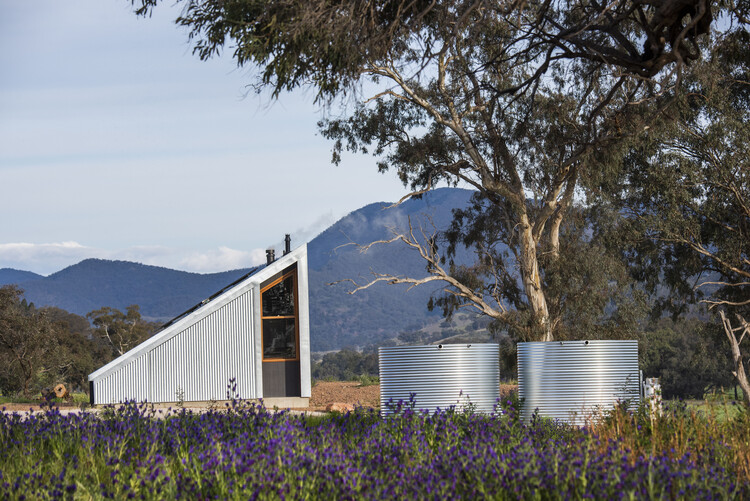 Text description provided by the architects. CAARCH was engaged by the client to design a small boutique accommodation offering on a rural property close to the town of Mudgee. Gawthorne’s Hut was born in the midst of the NSW Drought to assist the landowner to develop a diversified income for the property that was until now 100% reliant on a traditional cattle breeding and grazing model. The project's intent was to create a unique and sustainable tourism experience that responds directly to the history and context of the property.

The angled galvanized clad shell and rich timber-lined interior reference the predominant rural vernacular of hay sheds and outbuildings and in particular the existing hay shed that was destroyed by a storm in 2017. The angled roof form of galvanized steel is both a reference to the relic of the existing shed and also the client’s desire to accommodate the solar array on the building. The angled form is emphasized internally through a blackbutt lined ceiling which also frames the valley views to the East.

The recycled bricks have been meticulously repurposed from the only surviving part of the original cottage on the property, the fireplace. The recycled brick wall within the space is a tongue-in-cheek reference to the existing chimney while also allowing services to come down from the ceiling and provide a degree of separation to the bathroom. The stack bond coursing emphasizes the fact that the bricks are no longer load-bearing. The overall material palette is warm & inviting, with natural black-butt timber used extensively inside & outside. Gawthorne’s Hut is named after the historical owner of the property Benjamin Gawthorne, the recycled bricks coming from the remains of his original cottage.

The property demonstrates to guests the opportunities of building smaller footprints and incorporating sustainable design elements. Incorporated in this project is an off-grid solar system and battery storage, 40,000 Litres of rainwater storage, Double glazed blackbutt windows and doors, thermal mass via a polished concrete slab, gas hot water, efficient bathroom fixtures, and passive solar shading via the Western buffer created by the services enclosure. Stage 2 will see the addition of shading to western and southern glazing however the client is looking to assess the thermal performance over 12 months first before completing the works. Critical to the project is the concealment of the services so as to not detract from the picturesque rural setting and visitor experience. Great effort has been taken to conceal services out of sight with large galvanized clad door to the Western façade opening to reveal storage

At only 40sqm in area, the minimal footprint of Gawthorne’s Hut was designed to make the most of the open-plan interiors & bring the landscape in. The orientation maximizes the views to the East & South. Openings have been orchestrated to prioritize certain views of the Mudgee Valley, such as that from the bath & the narrow window allowing a view from the bed.

Gawthorne’s Hut has taught us that sometimes the smallest interventions have the ability to make the biggest difference.