Lehrer Architects has designed a tiny home village for homeless residents in Los Angeles. Called Whitsett West, the project was completed with the City of Los Angeles’ architects and engineers in the Bureau of Engineering. Located in North Hollywood, the project is the fourth collaboration in the past seven months designed to be a prototype for transitional housing formats. 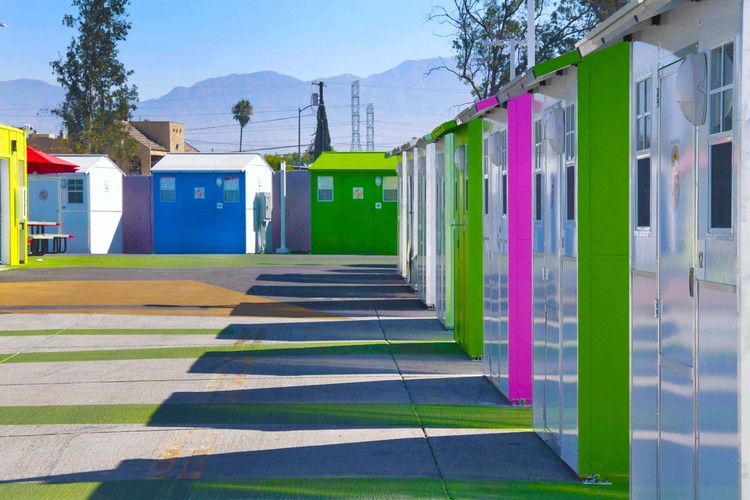 Whitsett West was designed to create a critical urban and social asset. Working in conjunction with multiple city agencies--led directly by the Bureau of Engineering and Ford Construction--Lehrer Architects LA designed the urban site with the strategic use of color and a composition of units to build community. The goal was destigmatizing housing the homeless by making these villages their own characteristic places throughout the city.

Saticoy sits on an extremely thin sliver of land, nearly quarter of a mile long and, at times only 20 feet wide, but needed to accommodate up to 150 beds in 77 units, plus hygiene trailers, storage, offices and communal spaces plus all of the requisite infrastructure: electricity, storm drains, sewers, water, ADA accessibility and drainage. Given the accelerated design and construction schedule, the immediate challenge of Saticoy was first simply to fit the required units onto such a narrow, onerous, and oddly-shaped site. The architects worked with incredibly long, narrow viewsheds and distance as a way to create a coherent urban place and deployed color in a visual language to cements the sense of a village.

The white units were designed by Pallet Shelter and delivered flat and unassembled to the site. They were used as bright objects composed to shape the communal exterior spaces between, creating a series of smaller village communities along the long site. The 8’x8’ Tiny Homes are swift to assemble and provide self-contained, conditioned space for each resident that can be locked by the occupant for a greater sense of safety, autonomy and privacy on the road to permanent housing. As each of these projects has evolved with its community, the importance of shared spaces has become paramount to the team when designing each subsequent project. The two largest communal spaces are located centrally, providing primary eating and gathering spaces for all community members. An 8 foot tall sound barrier fence was erected along the freeway side, to mitigate noise and provide privacy for residents as it incorporated the existing trees to provide a shady, insular respite from the streets outside.

A core tenet of Lehrer Architects’ practice is that there are “no throwaway spaces” and the design works with colorful, geometric patterns of blue, greens and yellow to a parcel of land previously derelict and disused. The Whitsett West Tiny Home Village is the latest project in the City’s program to provide more beds for its unhoused residents. It is located at the site of an existing homeless encampment, in between the 170 Freeway and some industrial shipping facilities and parking lots. The City invested in bringing new infrastructure to the location - shelter, utilities and services - to serve the existing unhoused community and to limit displacement of its members. The construction team faced significant challenges bringing infrastructure into a 1000 foot site from making it ADA accessible, to ensuring water is captured and drained properly, all on a lightning-quick schedule.

"The City quickly transitioned to tiny homes for the unhoused when the pandemic began, and this format has allowed us to build eight tiny home villages to date over the last year and half that accommodate 1,047 individuals. There are eight more of these tiny home villages in the planning and construction phases, which will provide places for 1,061 additional people,” stated Marina Quiñónez, the homeless facilities program manager and architect with the Bureau of Engineering.

This project represents another experimental approach to LA’s homelessness crisis, taking learnings for past projects to improve upon them. With the opening of Whitsett West, Lehrer Architects has built 500 beds through this prototype this year, creating a suite of projects that can offer a blueprint to other densely populated urban centers on how to take previously overlooked land and transform it into housing. The idea is to rethink the model of how to enhance community and provide housing for vulnerable residents.