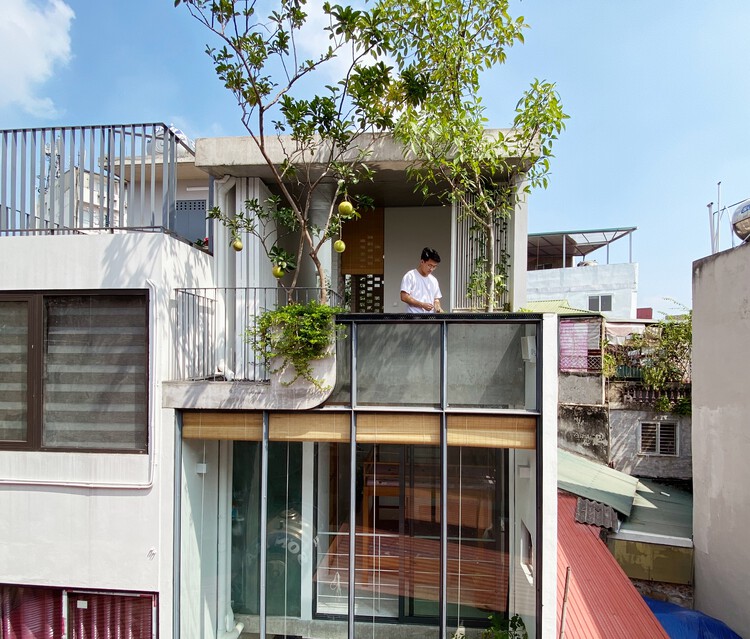 Text description provided by the architects. TH house is located on a narrow land in a very dense area of the capital city of Hanoi. The plot of the house with a size of 4x6m has only a front facade facing a narrow 1.2 m wide aisle. The local district is characterized by an informal arrangement of narrow houses on small plots connected by narrow streets.

With the rapid development of the capital city since economic reform Doi Moi in 1986 there is a large increase in population due to huge migration of inhabitants from the countryside. The current Hanoi is a dynamic city with 8 million inhabitants, where cultural traditionalism intermingle with huge population density, lack of public space and also the gradual loss of cultural identity due to accelerated economic growth. With such complex entry conditions, the architects were challenged to design a contemporary house reflecting the local cultural identity and the needs of Hanoi family.

The concept of a narrow five-storey house is to maximize access of the daylight and natural ventilation, planting greenery and spatial interconnection of all floors so that members of the family could communicate visually between floors. Family traditional ties in Hanoi and Vietnam in general are extremely important, this aspect is reflected in the design of the house. Open living spaces and a glass façade, with the possibility of shielding in order to create privacy, simplify socialization among the family members as well as with the neighbors.

With the current difficult conditions of the land, the house has only one narrow front facade, which is very close to the opposite neighboring house. The distance of the facades is only one meter in the upper floors. This north street facade is designed as an all-glass facade so that the transmission of natural light into the house was maximized to create an impression of a more breathable larger space. The different ceiling heights also helps to increase the feeling of enlargement of the house as well as the spatial diversity of the small housing. The solution of the vertical arrangement of the house allows the access of the fresh air and natural ventilation, which is very important in the humid warm climate.

The kitchen and dining room are located on the ground floor. This space is designed to provide maximum level of daylight from the roof level coming through the skylight and the gap of the offset volume of the upper floors from the main perimeter. The front part of the kitchen is also the main entrance into the house from a public street, which is often the local custom. By fully opening the generous sliding entrance door to the alley, a more suitable connection between the surrounding neighbors and the family is possible.

The living room - where all the family activities are concentrated - is arranged in the middle part of the house on the third floor. This main living area is located between the master bedroom on the second floor and the kids room on the fourth floor. The highest fifth floor is designed as a praying room for a family altar and a laundry area with the possibility of an access to the outdoor terrace with a garden and a view of the surrounding intensive development.

The city of Hanoi is facing a significant lack of greenery in public space. Greenery within the local subtropical climate serves as a functional element that can provide street shading and reduce the temperature in the city. It is also important to focus on the microclimate of the housing itself within the dense development. Greenery within the interiors and outdoor overhanging gardens improve the quality of life in the buildings. The arrangement and type of plants are chosen according to lighting conditions and spatial possibilities. Large planting pots are connected to automatic irrigation, which helps for the maintenance.

In addition to the improvement of the microclimate inside the house, the greenery also provides a mental and physical rest from the hectic life in the big city. The intention is the connection between man and a piece of nature within a compact living in a densely built-up area. The architects strive to find answers to the significant problems of the contemporary dynamic fast development of the city with a high density of population and development.