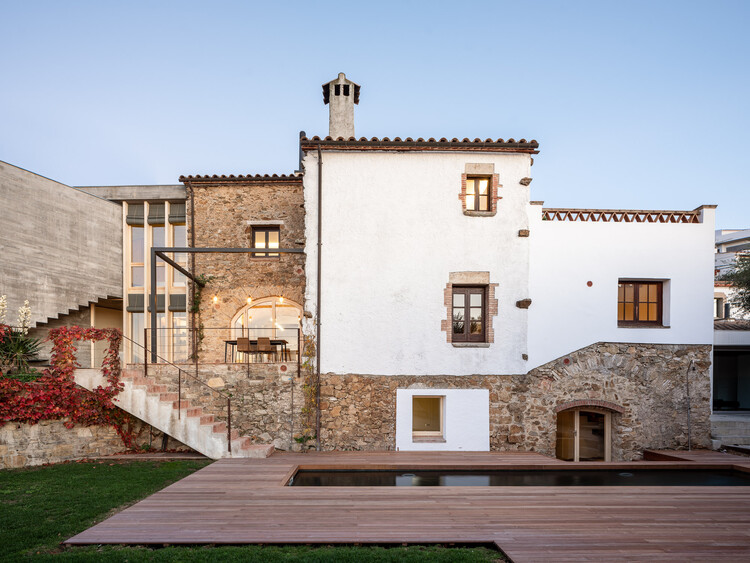 Text description provided by the architects. The House 1603 is a town home, with a structure of stone bearing walls and traditional elements typical of the Baix Empordà area. It is located in the heart of the small town of Begur, characterized by its mountainous landscape and its rocky beaches.

The project was born from the need to connect the different levels of the house, enhance the relationship of the kitchen with its immediate exterior spaces - making it the heart of the house - and finally, expand the house with a new living room and a room connected with the nice views of the landscape.

On the ground floor, we find the main living spaces. The different spaces that make them up, follow a logic of aggregation, that articulates them one after the other, without corridors, so that a concatenation of spaces is generated that allows visuals to cross and discover the different rooms as we move forward.

The first floor is formed by the sleeping area together with a multipurpose space that functions as a connector as well as a living room. We also find three insuite bedrooms, two in the renovated part of the house, and the last one in the new extension.

The materialisation of the project, is thought to understand what exists from the beginning in the original building from the new parts, so that the different stages that the building has experienced can be understood.

To solve the connectivity between levels, a concrete body arises from the interior of the house, expressing itself as a cut-out volume that acts as a staircase. Understood as a massive element, it dialogues with the heavy character of the original building. The facade facing the garden, on the other hand, is resolved with a traditional reinterpretation of the curtain wall that acts as an interstitial void between the old and the new. Respecting the materials of the original house and adding new elements that enhance its essence, allows us to maintain the character that defines it.