"What if the built environment could be a solution to the climate crisis, rather than part of the problem? What if buildings could act like trees – capturing carbon, purifying the air, and regenerating the environment?" Responding to these questions, Skidmore, Owings & Merrill (SOM) has proposed Urban Sequoia, an architectural concept inspired by the ecosystem at the 2021 UN Climate Change Conference in Glasgow - COP26. The design features “forests of buildings" that isolate carbon and produce biomaterials that create a new ecological and resilient urban environment. 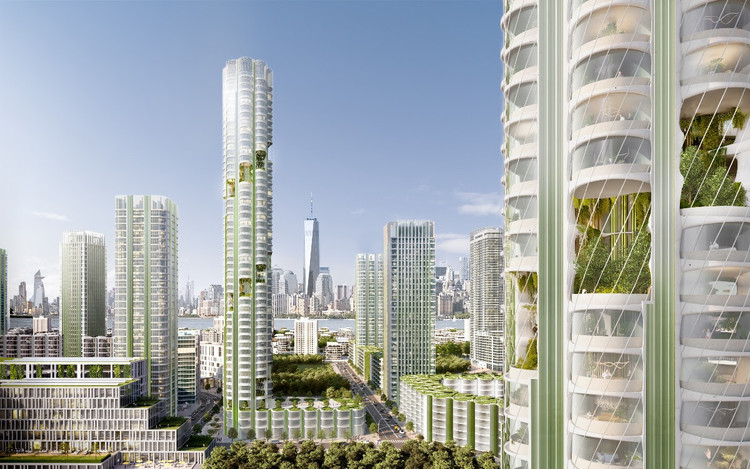 The project comes as a response to the undeniable need to transform the building sector, since it generates nearly 40 per cent of all global carbon emissions. The project's far-reaching impact will have the potential to create a circular economy that absorbs carbon and goes beyond the idea of being carbon neutral, transforming architecture into a solution.

Our proposal for Urban Sequoia – and ultimately entire ‘forests’ of Sequoias – makes buildings, and therefore our cities, part of the solution by designing them to sequester carbon, effectively changing the course of climate change. We developed our idea so that it could be applied and adapted to meet the needs of any city in the world, with the potential for positive impact at any building scale. -- Chris Cooper and Kent Jackson, SOM Partners

The project was developed through sustainable design thinking, innovation, and state-of-the-art technologies, reimagined at a building scale; the building design is optimized by minimizing the materials and replacing them with a selection that absorbs more carbon overtime, employing nature-based solutions, and by integrating biomaterials and carbon-capturing technologies. The buildings will use materials like bio-brick, hempcrete, timber, and biocrete to reduce the carbon impact of construction by approximately 50 per cent compared to concrete and steel.

Since this strategy can be applied to projects of diverse scales, SOM designed a high-rise for cities that can capture up to 1,000 tons of carbon per year, which is equivalent to 48,500 trees. After 60 years, the prototype is expected to absorb up to 400 per cent more carbon than it could have emitted during the construction phase. In addition, integrated biomass and algae, allow the facades to turn the building into a biofuel source that powers heating systems and cars.

According to the architecture firm's proposal, the captured carbon and biomass can also be used to produce biomaterials for roads, pavement, and pipes. The team explains that "by converting urban hardscapes into gardens, designing intense carbon-absorbing landscapes, and retrofitting streets with additional carbon-capturing technology, former grey infrastructure can sequester up to 120 tons of carbon per square kilometer. When replicating these strategies in parks and other greenspaces, we can save up to 300 tons per square kilometer of carbon annually". 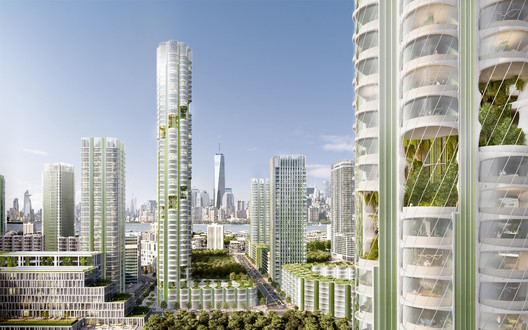