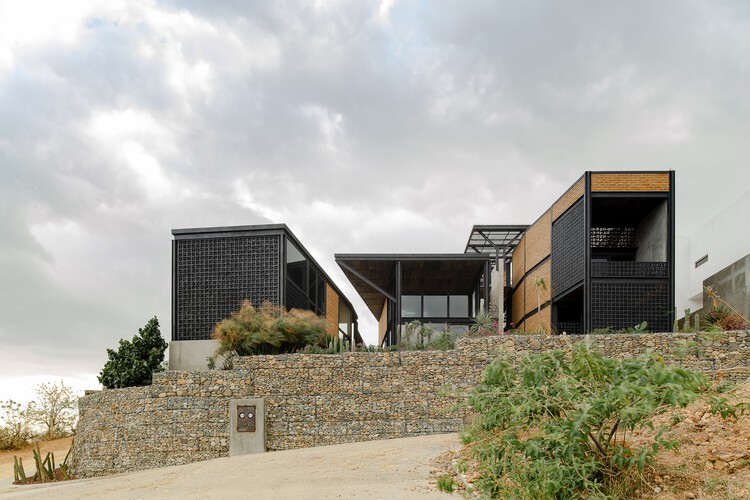 Text description provided by the architects. Located on a ridgeline of the Sierra Norte foothills above Oaxaca de Juarez, the site slopes down to the valley stretching eastward. From the upper floors of the house, the pre-Columbian sites of Monte Alban and Atzompa are visible atop neighboring hills. The house is organized on its 1,000 square meter site into three separate casitas of one, two, and three stories.

The volumes step down the 10-meter slope of the site and form a loose open courtyard space facing the valley below. An open concrete stair stands between the two and three-story casitas and is capped with a screened glass canopy. The separate volumes relate in scale to the traditional small-scale regional houses and allow for independent movement during the frequent seismic activity. At the northern side of the site, adjacent to the only neighbor, is the three-story bedroom casita.

The central, two-story casita contains a kitchen and dining on the ground floor and a studio and library above. The third, single-story casita sits at the southeastern corner of the site and contains a double-height living space. The central courtyard steps down into a garden that circles the house. A black tiled pool defines the edge of the middle terrace.

The heavy steel frame of the house is tied to deep a series of concrete foundations tied to bedrock. The steel frame has infill walls of locally produced adobe blocks or steel and glass assemblies. Large expanses of adobe are reinforced internally with steel and concrete. All of the steel windows were constructed by hand on-site. Nopo wood ceilings, stained black, conceal electrical work.

Naturally finished nopo wood cabinetry and custom doors complete the interiors. Throughout the house, a series of clay screens, stained black, provide shade from the intense daylight, provide privacy, and provide a seductive veil to the views beyond. A pair of terraces, open and closed, activate the roofs of the two casitas at the stair.

The loose organization of the house allows for constant cross ventilation which, combined with the massive adobe walls, maintains a cool interior temperature year-round. The house does not require heating or air conditioning systems. Water is harvested from the casita roofs during the daily rain of the wet months from May through September.

The water is stored in a cistern beneath the living room casita and is filtered for domestic use throughout the house. The roof area and cistern capacity are sized to address water needs through the dry season from October through April. All wastewater is handled on-site through a system of bio-digestors, completely separate from the city system. Water heating is created by solar hot water heaters. 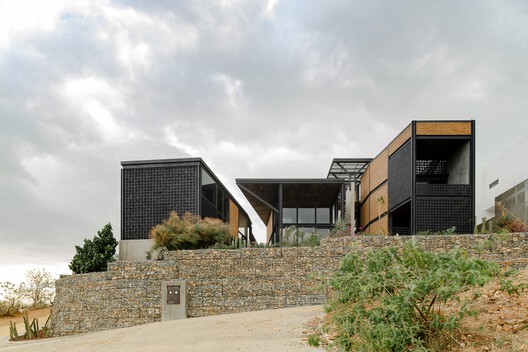