Save
House in Ferraria / Enter Arquitectura 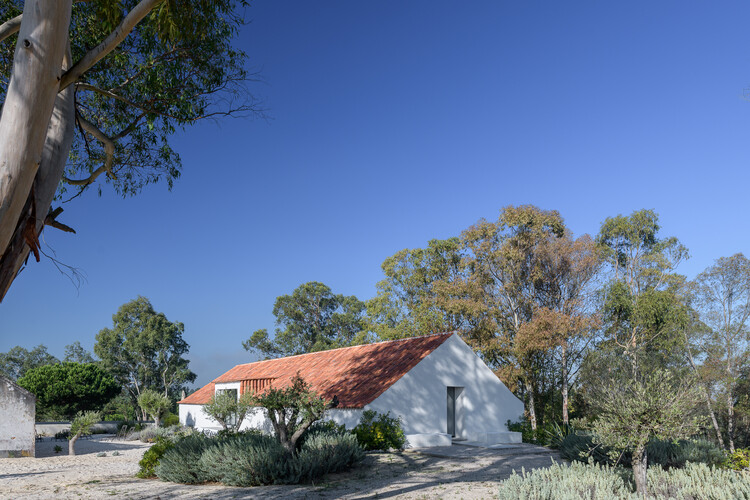 Text description provided by the architects. This was a project in which rural aesthetics were embraced to their fullest extent. Amidst native forests and cultivation fields, the existing structure upon which work was to occur, had been a traditional farm warehouse. Rectangular in form and constituted by two floors, it used to serve the agricultural trade of Herdade da Ferraria. The approach to our creative process for this project was to welcome the proposition of the structure itself; reformulating it according to client specific guidelines.

Thus the site was converted into a family home, maintaining its old barn character in sustained dialogue with its encompassing terrain. Intentions were to refine the typical features of the house as well as the natural potential of the surrounding land.

The modifications provoked major changes to the character of the site. By making use of the pre-existing interior division of the house, the terrain was elevated in order to align the upper floor (and social area) with the existing main entrance. The fundamental purpose of this transformation was to shape the terrain around the house by providing a stronger connection to its natural environs but also to allow for more privacy for the bedrooms floor (inferior, ground-level).

The richness of the surrounding natural environment defines the two visual components available to the inhabitants; the bedrooms floor benefits from a forest view, while the social floor, now complete with exterior deck (adjacent to the living room), looks out over the property’s agricultural legacy.

Given the condition to fully respect the old building’s historical integrity, the choice of materials and construction techniques reflect this objective. Wood is dominant and embodies grand expression on the upper floor. The structure of a classical roof truss, visible from floor to roof, provides the living area with unique ambiance, which in turn animates the longitudinal space by marking it with transversal repetition of the beams.

Even with the use of contemporary materials for added comfort value and energy efficiency, the concern was to opt for finishings that would merge with the conventional classic aesthetics of the building, such as with the external window frames.

Also taking into account environmental issues regarding ecological footprint (of which Enter partakes), it was also evident that effective solutions should be sought, such as the use of cork for natural insulation (organic-based and recyclable) as well as solar panels on the terrain, camouflaged so as not to distort the landscape, by keeping it “clear” of equipment. We believe we have managed to create an emblematic house within Herdade da Ferraria, that preserves the memory of its local inheritance while simultaneously offering all the comfort of modern amenities.