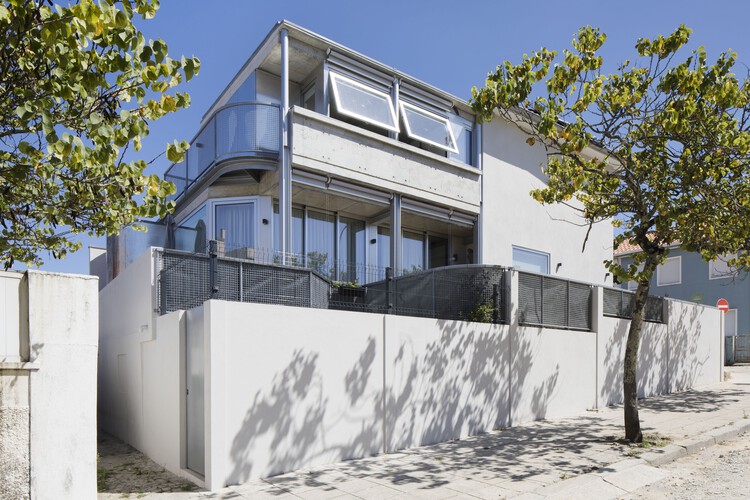 Text description provided by the architects. The existing house, in a wedge-shaped corner of Bairro da Vilarinha, already had a preexisting extension to the west, to which direction it could be extended again, thus answering to the order made. The neighborhood, one of the last ones from the Estado Novo period located in Porto to invest in single-family housing with small backyards for a social class consisting mainly of state employees (1958), consistently repeats the typology as a model in a significant area of new urbanization. Throughout the neighborhood, there is a clear attempt to reproduce belatedly some modern models of public initiative housing, originally from the German and Russian experiences from the beginning of the century.

We sought that the requested expansion, which program indicated the same area as the one already built, maintained two of its foundations - a search for the elementary and constructive modularity -, but that would also completely change the nature of the proposed spaces, in the dimensions of language, materials, and relationship with the solar quadrants and urban surroundings. From these points, the language delimitation was, in fact, imposed by the City Council itself which established specific rules for interventions in Estado Novo neighborhoods such as this one, in order to protect the integrity of the original architecture, whose true urbanistic interest is only found in the reading of the whole.

Thus, to the plaster and stone of the original house, more enclosed and monolithic, we add an open and structural volume, in which any other material besides glass composing the wall is equally reflective and miscible with its surroundings. The geometry of the structure deployment is essentially solved in three metal porticos, support of the new slabs and reinforcement of the old ones, which limit meets the middle portico.

Economic rationality underpinned the maintenance of the original structures, with only the necessary metallic reinforcement, and extended their influence on the project through a certain austerity with which the interior spaces’ design was approached. However, this continuation of the spirit of the original project finds other mismatches in the interior space, through a delimitation of the sector that will benefit from the higher windows of this new intervention and, above all, by the criteria of the scale, intensity, and type of use that were being reported to us.

Therefore, an office on -1, which opens to a new courtyard at the lower level, a kitchen and dining room on the ground floor, which extends to a terrace for dining, and the largest of the three bedrooms on the first floor that projects towards the south through a window, are spaces that are located in the new body, while a small living room, a bathroom, and two smaller bedrooms are located in the pre-existence. The imposed search for the elementary of the project was only broken after discovering an error in the work that, in the bulk, was promptly corrected, but of which little record was left, overcome by the obvious and jocular reality that an element of disturbance would, after all, be welcome. 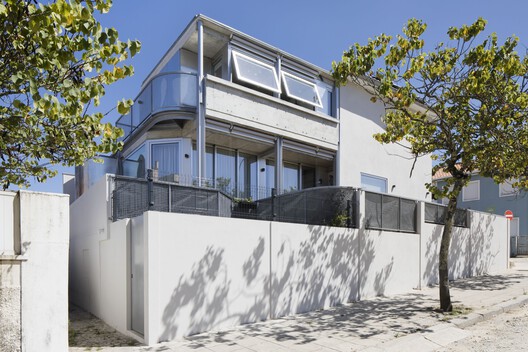