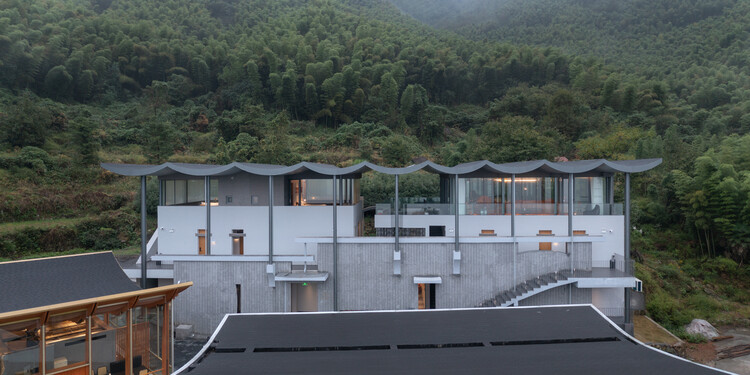 Text description provided by the architects. The roof is the connection between the building and the sky, an important shelter of the space, but also the core element of the building. The formal logic of the roof is influenced by two natural elements, gravity, and rain. Gravity is known as a permanent law of all things, however, rain is known as a natural thing that changes all the time. The resistance to gravity and the dredging of the rain determine the evolution of the roof. With the development of modern materials and mechanics, natural elements are no longer dominant in the form of roofs. The architecture shows an incomparably powerful human result, becoming more and more like a machine. The geometric purity of the form and the sense of the manual operation of the form (cutting, twisting …... ) demonstrate the ambition of modern people. Our philosophy of architecture is not like this. Architecture is not to drive away from nature, but to accept each other in the unity of man and nature: to guide the wildness of nature and to take good care of the vitality of nature.

Rain is water falling by gravity. Water is both invisible and tangible, soft and strong. Containers can depict the shape of water, and gravity can push the force of water. The conduit of water is the portrayal of the dynamics of gravity, while the container-like architecture is the static shaping of gravity. A stillness and a movement, condensed by Newton to the law of universal gravitation, is enabled to present a variety of deductive proofs because of architecture. Roof III is located in the middle of the mountain far from the city, surrounded by bamboo forests and farmland. The two separate village houses are covered with a large roof. With the roof popped up by columns, rain can lead to the ground in a variety of ways and paths, forming an invisible and tangible confrontation. Here, we call it the six types of taming water:

1. Lifting water. To hold the roof high, either by standing up from the ground or being supported from the wall, the continuous water-wave roof is a water-guiding container that converges raindrops that fall evenly into a linear waterway.

2. Running water. Water rushes down in a vertical direction, forming the most powerful dredging. "Dripping water wears away the stone" is an ancient saying describing water power. The waterway is designed downward to allow water to penetrate the concrete slab so that the force of water can be manifested.

4. Releasing water. Waterfalls directly along the eaves from the half-story roof and falls into the pond. The most austere way of water falling is the original form of freely released water.

5. Treading water. On the second floor of the building, there is a pond which is unavoidable along the path. You have to be well-prepared to stride across the circular steps in the pond, just like avoiding puddles when walking in the field on a rainy day.

6. Crossing water. The bridge is a poetic artifact, connecting and spanning: crossing the stream, crossing the pond, crossing the floors, and finally, forming a linear connection between the space and the body. On top of Roof III, there is a big mountain pavilion, open on four sides. In the room, you can connect your body to the faraway mountains; under the eaves, you can keep the beautiful scenery in your heart.

“Chuan Fang”, designed in 2016, frankly reveals the metal plumbing on the facade of the building to form the metaphor of water "flowing down". It is the first attempt to explore the explicit expression of gravity and the rain. "Roof III " is a further discussion of gravity and the rain, not only the "revelation" of form but also the practice of a careful intervention in nature: "if you want to take it, free it first; if you want to tame it, you must obey it first." 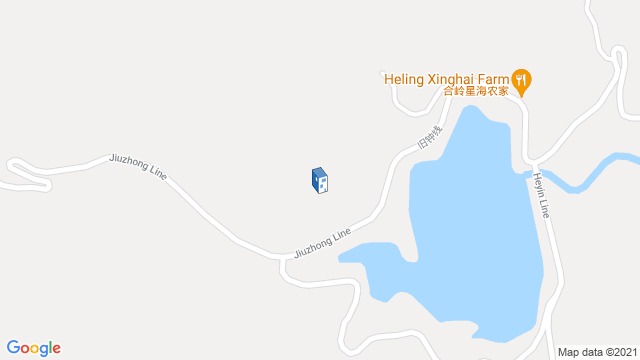 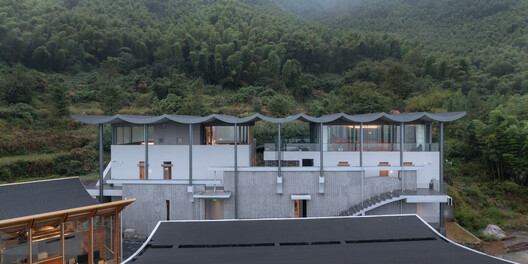