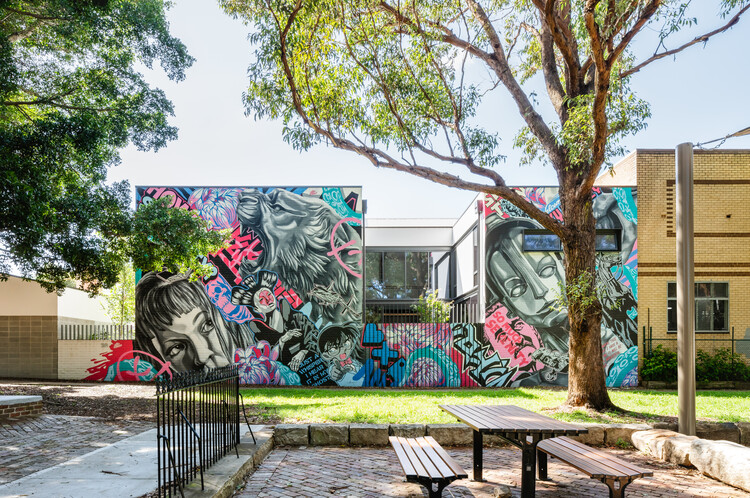 Text description provided by the architects. Graffiti House is the amalgamation of a brief which sought to convert an existing clothing warehouse into a home that was both a refuge punctuated with moments of intimacy while also a series of spaces with a sense of drama and connection with the outdoors. The project had a shaky start on-site and not long into the construction the original builder became insolvent. Fortunately, Durack Architects shares an office with a respected builder who was able to take over the works and bring the project back to life.

The conversion of the building into a new 3 bedroom home was a deliberate attempt to prioritize spatial quality over floor space. The clients were a couple with no children and a modest brief looking to make the most of the large open spaces on a modest Sydney budget. The client had a love of utilitarian warehouse buildings and was adamant that the feel of the original space was not lost through the renovation.

While the original structure had a singularly dramatic presence it also was at risk of being spatially amorphous and without definition. To address this the existing volumes were maximized and defined by a u-shaped mezzanine which contains the plan and is in part suspended from the existing steel roof structure. While creating a home with a real sense of connectedness this introspective plan has also encouraged intimate spaces wrapped around a protected and elevated courtyard.

While the planning was an integral component of the adaptive re-use of the building it was important that it be complemented with appropriate structure, detailing, and materials. A sharp, utilitarian industrial aesthetic was employed with exposed steelwork and timber joists along with industrial grating for screens and balustrades typically used as flooring in factories. This was continued into the finer detail with rumbled brass tap fittings and joinery handles.

A relationship has been created between the home and the park through the breaking down and opening up of the facade through the raised landscaped courtyard. The removal of this section of the elevation floods the interior double-height voids with a dappled light while also offering from the park a filtered glimpse into this new home. Paying homage to the diverse and textured community of St Peters this extensive facade over-looking Simpson Park has undergone a facelift with a piece of a commissioned street art collaboration between a gallerist client and local artist Alex Lehours.