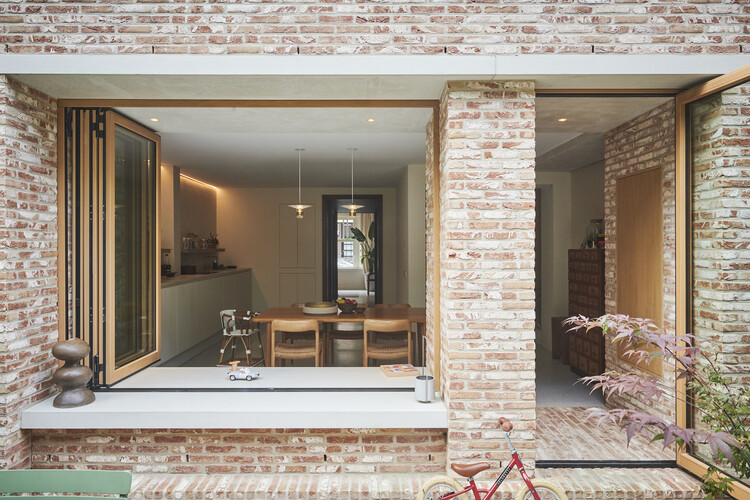 Text description provided by the architects. In the Hugo de Groot quarter in Amsterdam, studio PROTOTYPE designed a renovation to merge two residential houses. The result is a special house with the features of a city villa. The house dates from the early 20th century, as part of a traditional closed block with an overwhelming green oasis as a courtyard.

By creating extra living space on the garden side, an idea rose to divide the house according to the ancient principle of a front and back house/room. The front and back are enunciated through a dark core at the center of the house, which encases shelves as well as the spatial staircase. This layout creates a beautiful sequence of spaces, creating spatial experiences between light and dark.

Through the design intervention at the front of the house, a narrow void is created to connect the upper and lower houses together, as well as to articulate the expression of light to the new united home. The extension to the inner garden appears heavy and massive with the traditional brick forming the three functional columns. The brick columns ensure the transition between inside and outside is clearly tangible. The brick also continues into the interior of the extension that is combined with light materials, such as wood and micro topping, to create a visual balance between the various materials.

Tradition versus modernity is a recurring theme within the house concept. The use of colors in the form of pastel shades within the interior naturally flow into each other, while the materials meet in nuance. The palette of materials is complemented with timeless furniture from the 50s and 60s with special pieces by Niels Otto Møller and Arne Vodder in their original conditions.

The exception is the beautiful German Medizinschrank from the interwar period, which was not so well known on the marketplace. Inside the home, gathering places are created within the living areas of the house. The best spot in the house is the concrete bench that connects the house to the garden—letting in the greenery and giving the children a place to play.