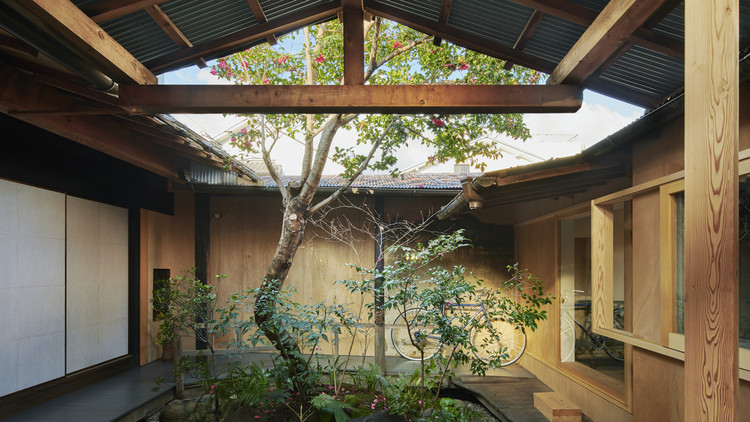 Hitotomori Head Office in Nara is our workplace - Hitototmori aims to provide not only architectural design but also “design for living” which includes ideas for a healthy life through the enrichment of interpersonal relationships and eating habits. We have restored a 140-year-old traditional Edo Period home in the city of Nara where people, ancient forests, and urban areas all coexist in one historically rich environment. The redesigned Hitotomori space functions as a design office, guesthouse, and cafe and is our primary working location.

Prior to reform, the buildings were divided by a courtyard garden into the 140—year-old main building and a paneled annex. The main building served as a living space and traditional Japanese sweet shop. The annex was used as a kitchen and office space. On the left of the picture above are Mt. Wakakusa and Kasugayama old-growth forests, which are also world heritage sites, and on the right are residential areas. Hitotomori is blessed to be located in a rare urban environment that is nearly adjacent to an old-growth forest in which logging has been banned for 1200 years.

Covered in older traditional roof tiles, the main building is pictured on the right. The annex, roofed in red, is on the left. Corrugated sheets surround the camellia sasanqua tree in the center. The structure of the buildings has remained unaltered and the exterior has been largely untouched. Below, we highlight some aspects of how the space has been refurbished with a modern approach while maintaining both the existing structure and the atmosphere of a house in traditional Nara Machiya.

Courtyard Garden - Courtyards are built as a place to invite both sunlight and a breeze into the center of traditionally deep Japanese townhouses and formerly provide a space for residents to gaze upon gardens of stone flower beds. In this renovation, we used a doma, or traditional earthen floor, to allow people to enjoy the garden from close up as well as provide appropriate drainage. The stone flower beds were deconstructed and the garden was redesigned as a landscape for the forest view.

As if birds were called by nature to drop the seeds in just the right spot, sunlight bathes the young leaves of a Japanese Beautyberry each morning. A simple roof, like that of a hut, was built around the courtyard garden. Distracting columns and beams were replaced to reorganize the space. We used lauana veneer boards to maintain the original cozy hut-like feel while expressing a sense of temporariness. We have created an unpretentious and frank, yet stoic space that expresses who we are and stands in contrast to the historical architecture of the building.

Inner Garden Path - A roofed inner garden path that runs from the front of the building to the courtyard garden is a special feature of traditional townhouses in Nara Machi. These inner paths typically also have a counter opening up onto the kitchen. The three preexisting skylights set into the roof allowed an impressive amount of light to shine down into the dark inner garden path. During the reform of the building, the tiled kitchen counter was disassembled and replaced with a basin where flowers can be displayed and the existing white wall was replaced with a black clay wall which keeps the natural light from diffusing.

The renovation has allowed us to reimagine the inner garden as a symbolic space where one can feel the subtle changes of natural light. This space captures the essence of Hitotomori’s two meanings: "people and woods" and "one light." The inner garden path also serves as the entrance hall of the guesthouse. The name of the guesthouse is "Yado Hitotomori,” which means “One Light Guesthouse” and in keeping with the name, there is only one light in the inner path. This one light illuminates the tsukubai, a traditional Japanese washbasin, which was relocated from the garden and has been repurposed as a vase greeting guests with fresh flowers grown in the garden.

Hitotomori Guesthouse - This former residential area of Nara Machiya has been approved for a limited number of buildings to be made into guesthouses. While one of the features of traditional Nara Machiya buildings is the ‘Tsushinikai’ or ‘miniature second floor’ with its very low ceiling, in order to highlight the beautiful structure of the roof frame, the ceiling was removed during this renovation. The floor of the bed area was raised and allows for a distinction between the floor and the bed, helping to provide a more comfortable feeling for foreign guests. To provide the best conditions for gazing outside through the window, the window’s sitting area was placed at waist height. Brass handrails were added to make climbing the steep box stairs easier. Hanger -pipe was installed and connected to the brass handrails, allowing the handrails and hanger-piper to provide support to each other. The configuration has a horizontally long proportion and was designed keeping in mind how it will look to people sitting on the tatami flooring. Over time, the base brass surface will give a rich mellow glow that will serve as an accent to the space.

The architectural office of Hitotomori Registered Architects -  Formerly, a hut-like extension between the courtyard garden and the simple paneled building was used as the kitchen space of the Japanese sweet shop. This hut-like extension has been reformed to now serve as an interface between the courtyard garden and the office, providing each room in the office (reception room, shower room, kitchen) with a view of the garden. While the overall construction, which uses the preexisting paneled wall, is relatively simple, the space itself, making use of variations in height and brightness, abounds with a sense of modulation.

As in other historic cities, historic buildings in Nara are often difficult to maintain and you can often see locations where they have been dismantled and turned into space for things such as coin parking. Our plan is to cover the rent on our office space by using the profits garnered through operating our guesthouse and cafe. We believe that acting in this way helps to extend the life of historic buildings and contributes to maintaining tourism resources in the area. I continue my work as an architect keeping in mind the need to fill a socially responsible role and hope that the example of Hitotomori will help promote similar actions on those around us and lead to more historically valuable buildings being preserved for the future. Towards a beautiful Nara. Please come and visit us soon. 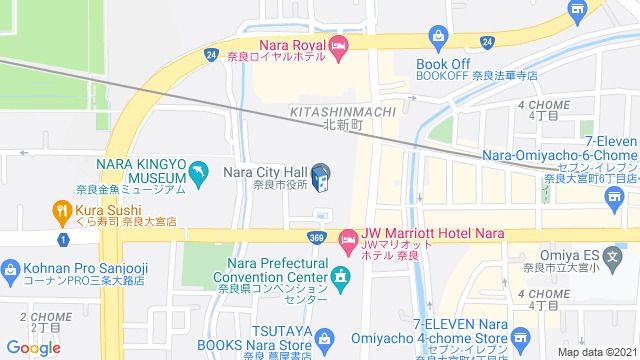