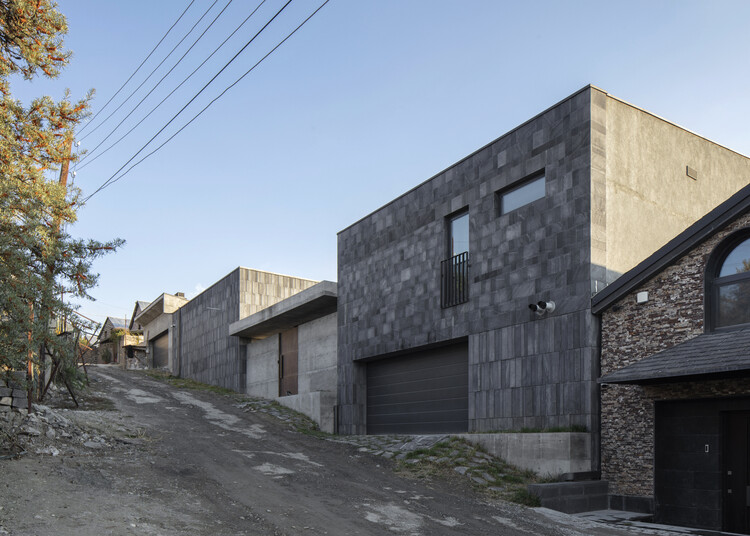 Text description provided by the architects. Tigran Tsitoghdzyan is a New York City-based visual artist. He was born in Yerevan, Armenia, in 1976. He migrated to Europe and then later in 2009 to the US. Since then from New York, his new series, technique and images are experiencing a phenomenal uprise that comprises both art quality and a bold, intriguing, personal expression with a growing resonance on the international scene.

His parents Levon and Veta live in Armenia, in a small village not far to the north of Yerevan, in a house that at first served as a summer house, then as a permanent housing․ It has been built, rebuilt, and constantly improved by Levon for 40 years. The project began with the idea of expanding the existing house with additional bedrooms and a pool as Tigran and his son are spending more time in Armenia. Later it was decided to add a spacious studio with the ability to work and exhibit paintings. The building is located on a site with difficult terrain, with a significant difference in elevation between the north side, where the street and the entrance are located, and the south side.

Being positioned on a hill dictated the general architectural solution: if possible, open a view of the surrounding beautiful landscape. From the southern side, the building is visible only from a distance, and the northern entrance is located directly on the village street, so the volumes have a different scale. It has a seemingly chaotic long chain of the small one and two-storey volumes on the side of the street, and a larger, austere, and simple one from the south. These two different scales are also emphasized by the size of the stone facing the basement and walls, for which two different modules, 60 cm, and 90 cm, have been chosen.

The extension of the residential building with two new bedrooms and a garage is conceived in a way to combine the old and the new houses into one organism. After the extension, one of the internal walls of the old house was removed, and the two buildings were sewn together by a common new staircase. The studio is separated from the residential building by an entrance patio and a wide external staircase made of basalt blocks that descends to a terrace in the courtyard. The building is monochrome, the main materials are architectural concrete, local basalt, and glass surfaces. All parts and elements are custom-made by local craftsmen.

Despite the fact that the studio was conceived as a private space, Tigran Tsi decided to organize open days for the public every Saturday, which received an unexpected response, and in a short time several thousand art lovers, mostly young people, visited the studio. Thus, the building has become a significant public cultural space, and the presence of exhibition space, several terraces, a small cinema, and a lounge zone will make it possible to carry out cultural and educational events in the future.