Save
"Nature and Structure Connect to Transform Our Landscapes and Even Our Climate": Marc Mimram on His New Bridge in Austria
Share
Or
Copy

Eduardo Souza (ArchDaily): Focusing on the Linz Bridge project, what were the main constraints, guidelines and challenges?

Marc Mimram: For the Linz bridge project, as always, we have been looking at the conditions given by the landscape.

Those conditions are mainly focused on two aspects. The first one is given by the variation of the Donau river. The second one is given by the relationship with the existing bridge that is next to it. Concerning the Donau river, we had to integrate the potential widths of the river (major and minor river beds), so that the project could be coherent with the part over the ground of the North side. This gave us a geographical measure which has been translated in the spans of the bridge.

A bridge is not a generic construction, but should always be a specific one. It has to be embedded in the river banks. A good bridge should not be able to move from its place, not even ten meters.

The structure, the span, the geometry and the materiality are linked to a specific characteristic of the bridge.

For example, for the new bridge in the historical center of Bath in England, we developed a special structure made of continuous curved Vierendeel beams to suit the specificities of the area.

ES: As a bridge is clearly a structural expression, can you talk a little about the structural design of this bridge?

MM: The structural design of this bridge comes from a very old system known as double cantilever. In the photo below, you can see the system that was proposed for the very famous Firth of Forth Bridge in Scotland, Edinburgh,1879. We have reinterpreted this classic device by introducing a variation of curves along the supporting structure and along the deck. This gives the bridge a delicate variation of curves, and the variation of flexion in the members are related to the variation of inertia of the sections. This dialogue between forces and geometry maintains the rationality of the structure, but also allows a large amount of freedom in the way we constitute the members of the structure with steel plates. The double curvature of the upper flange, the angulation of the webs, the disposition of the welding, the thickness of the steel plates all give us a tension of the steel structure under the light, the variations, the darkness of the shadows.

At the different scales, from the geographical one to the closest one, the whole bridge has to be designed in detail, including the fabrication constraints given to the structure due to vibrations from the lights and seasons, variations under the movement of the river, under the sunlight and the artificial lighting at night. The song of gravity should be heard through the structure, the movement of forces, thickness, and fragility, always with attention to frugality.

You can also see this in the Sino-Singapore bridge of Tianjin, China, where the structure is considered as a floating device made out of large concrete double curvature shells.

ES: How is the design and calculation process like, for a project of this magnitude? Are models made? Structural tests?

MM: For the design and calculation of one of these projects, we always make a 3D model of the structural geometry members which is directly linked with the process of calculation directly, digitally. Every variation of the geometry is reflected in the 3D model and we can have a direct dialogue with the structure. To check the variation of the plate thickness, inertia of the sections give the specific characteristic of the members which are going to be used in the structural calculation. The project is part of this dialogue.

Once the geometry and the preliminary design is defined, we make physical wood models at different scales from 1/10 to 1/500, to check the variation of the curves along the sections and of the lights and shadows along the structure. A model is also made for wind specifications of the sections and tested with a wind tunnel. From sketches drawn by hand to computer representations, we always want to be sure of the delicacy of the structure, even if the steel weight of the structure is over 8,000 tons, as it is in this case, and also taking into consideration the different steps of construction in the factory, on site and the way it will be erected; in this case with floating on boats on each side of the piles.

ES: This phrase caught my attention in the description of the bridge on your website: “The new structure must not disturb the balance that exists between the verticality of the cable-stayed bridge and the horizontality of the existing bridge. The project must not create confusion in the sky by a new verticality. The Voestbrücke takes to the sky, we take the horizon.” This respect for context is a constant in your work, and I think it is a very beautiful gesture. Can you talk a little bit about how the context influences your architecture?

MM: The context is always, as I said earlier, a condition for the development of the structure. It is not only a matter of span, coefficient of security, limitation of stresses, but the dialogue between landscape and structure. The geography where the bridge is being constructed is going to change a lot with the arrival of the new bridge. In that sense, we have a large responsibility in the transformation of the situation.

Architecture is an art of transformation, from the extraction of iron to the installation of the structure; every step transforms the earth that is under our responsibility. Nature and structure are connected in the way they are transforming our landscapes and even our climate. This is a matter of carbon content but also a way that bridges are crossing the borders of geography.

Materiality is the main issue for the project. It can be experimented as seen in the Montpellier railway station made out of a high stress concrete thin shell structure. 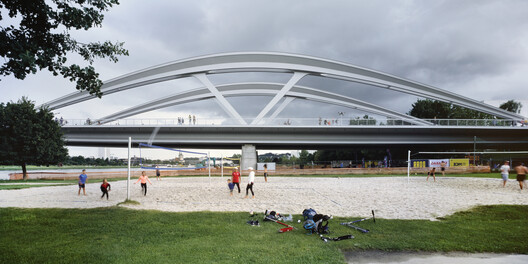