The Royal Institute of British Architects (RIBA) awarded the 2021 Stephen Lawrence Prize to Tonkin Liu’s Water Tower, an adaptive reuse project which converts a disused industrial structure in the countryside into a residential space. The design has a strong attitude towards material recycling, retaining much of the original structure while creating adaptable interiors. The utilitarian aesthetic blends with a creative re-engineering of the project, showcasing an architectural approach in tune with contemporary sustainability values. 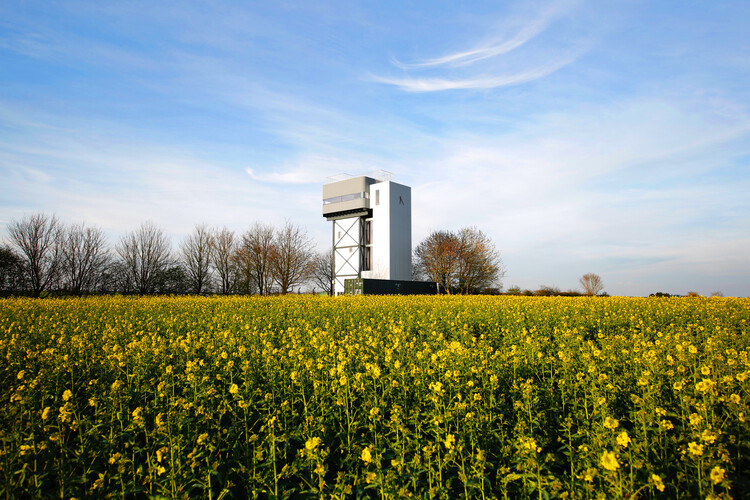 Tonkin Liu’s project is simultaneously a technical intervention and an expression of the architectural possibilities of adaptive reuse. The design retains the original water tower, using the tank as a living and dining space. Below the tank, a new structure containing two bedrooms stands suspended above a garden room, thus preserving a minimal impact on the land. A separate stair tower was added, also serving as a stabilising element for the adapted structure. The latter was carefully re-engineered to account for the new load distribution.

The Water Tower demonstrates how buildings can be saved and enlivened through expert retrofitting, high-quality craftsmanship and faultless attention to detail. The jury unanimously commends Tonkin Liu – the worthy recipient of the 22nd Stephen Lawrence Prize – and their ambitious client for their creativity and dedication. With the positive support and involvement of the local community, they have breathed new life into this historic rural structure to create a truly unique family home. - Marco Goldschmied, Jury member and Past RIBA President and Founder of the Marco Goldschmied Foundation Marco Goldschmied

The jury also awarded a special mention to Floating Church by Denizen Works, a church and community facility built on a narrowboat in London. Established in 1998 in memory of aspiring architect Stephen Lawrence, the prize considers projects with a construction budget of less than £1 million with the aim of highlighting and encouraging new architectural talent.