The task of rehabilitating buildings has been increasingly encouraged and celebrated for some reasons: first, by renovating and not demolishing, a large part of the material resources present are used, reducing the use and exploitation of raw materials and, in certain cases, the memory and the original urban fabric are preserved. A good rehabilitation also incorporates the modernization of the building to increase its energy efficiency, readjustment of facilities and the correction of pathologies, making it coherent with the demands of current users. For the building's owners and users, this means a better quality of life and, also very important, an appreciation of it. An element that plays a fundamental role in rehabilitation is the façade, which combines aesthetics and performance.

As the first barriers between the weather and the building itself, façades are the parts of the building that “denounce” the passage of time through stains, paint fading, infiltrations and other pathologies. It is also an essential part as it will directly affect the thermal and acoustic insulation, improving the quality of the interior and reducing the need for heating. A system that works especially well is that of ventilated façades, which can easily be incorporated into rehabilitation of buildings. It is a system of panels installed on metal uprights, creating a distance between the outer layer and the building itself. This allows air currents to pass through this gap, creating thermal and acoustic insulation, as well as effective protection against atmospheric agents. While in summer this ventilation reduces the temperature and the entry of moisture from the outside, in winter the air acts as a heat accumulator.

In ventilated façades, the external panels can be made of different materials. So-called composite panels, for example, are composed of two aluminum sheets and an inner core filled with minerals. Available in various dimensions and colors, these sheets have excellent mechanical properties, low weight, surface flatness, dimensional stability, durability and ease of maintenance. Furthermore, they can be fully recyclable and have high UV and impact resistance. For rehabilitation, another advantage of ventilated façades is that it makes it possible to hide the installations, unevenness and even imperfections of the original façade.

By modernizing the façade, there can also be an appreciation of the building's heritage. According to STACBOND - a manufacturer of composite panels - with the inclusion of a ventilated façade a property's value can increase up to 20% due to the improvement of aesthetics and habitability, while also representing an estimated energy saving of up to 30%, because of its improved performance. In addition to the ventilated façade, it is also possible to improve the thermoacoustic performance of the project through other mechanisms, such as cantilevers and roofs, slats, shutters and trusses, which enable the dissipation and reflection of thermal energy, reducing the need for artificial energy, such as air conditioning and even lighting.

These are shading devices which reduce solar incidence on openings or on the façade itself. Horizontal elements, such as roofs, or vertical elements, such as brises and trusses, when well designed, can filter out unwanted sunlight in the warmer months, with the added bonus of becoming elements that make the façade more pleasant and dynamic.

To illustrate the potential of these systems, STACBOND provides some examples of applications in multiple types and scales. At the Estadio Municipal de Balaídos, the renovation by Pedro de la Puente Crespo, the traditional structure of the stands received a coating of composite panels in a blue metallic finish. What stands out in this case is that the various vertical strips that the façade is divided into take on different wavy shapes, creating a pattern of movement and modernity to the Stadium.

At Ibrahim’s Khan Theater, by Loucaides & Philippou architects, in Cyprus, the rehabilitation of the stone buildings received coated metallic annexes whose bold shapes are highlighted by copper finishing plates. These adjoining volumes act as walkways, circulation spaces and mark the entrance to the complex and clearly break with the volume and materiality of the rest of the building.

Ventilated façades can also be used in extensions, such as the Cultural Center in Getafe, Spain, where the building completely altered the low corner building. The rehabilitation unified its template, using black and white as a coating, and punctuating the façade with vertical laminar openings. The pattern adopted for the coating brings movement to the urban environment.

In a healthcare building in Norway, three types of cladding were used that completely changed the aesthetics of the concrete building. While the line of frames was marked with a gold coating, the rest of the façade is covered in a color that resembles anodized aluminum, broken by another pattern of panels that clearly mark the building's entrance.

In A Estrada, Spain, two colors of contrasting panels (Pure white and Carbon) were used to cover the plastered masonry of the original façade of a residential building, bringing a modernized look to the building.

In France, in a commercial building, the intervention was more significant, even changing the frames and their location. Silver metallic finish was used throughout the building and highlighted by the horizontal and vertical uprights that create a differentiated pattern on the façade of this predominantly horizontal building.

These six examples show some of the versatility of ventilated façades with composite panels. Find out more details and the potential of this product in our catalogue. 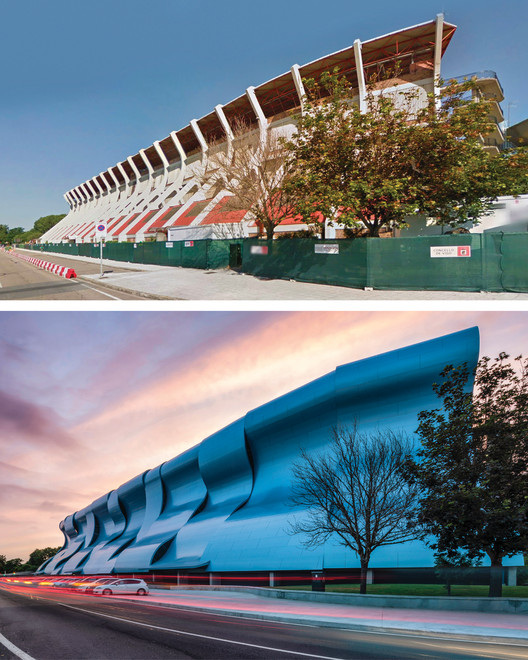