Sid Lee Architecture's Les Ateliers Cabot has won the 2nd edition of Montreal's C40 Reinventing Cities, a competition that "aims to encourage carbon neutral urban regeneration and to implement the most innovative ideas for transforming underutilized sites into hotspots of highly sustainable development and resilience, and to serve as a model for future developments". The winning proposal reimagines traditional development objectives, replacing economic profitability with the benefits derived from the relationship between man and the planet. 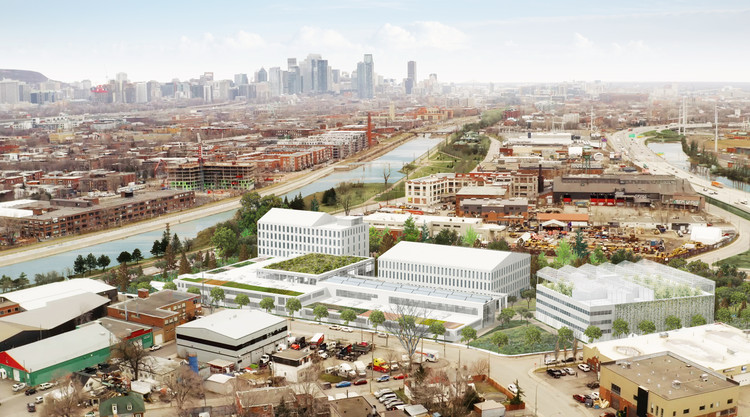 Les Ateliers Cabot proposal revives the Canadian Power Boat Corporation industrial buildings, located at 4000 Saint-Patrick. Sid Lee Architecture used water as a vital natural resource placed in the midst of its landscape and environmental strategy. Its seasonal fluctuations reconnects two major biodiversity corridors: the Aqueduct Canal and the Lachine Canal. The proposed project allows flora and fauna to regain control over the architecture, creating a link between man and nature.

The community and environment-oriented firm aims to achieve operational carbon neutrality using creative low-carbon solutions such as energy loops between buildings, wooden structures, Bicycles Cannibal, and organic photovoltaic membranes, to name a few. The reuse of existing buildings and the elimination of basements for new ones creates a 44% reduction of embodied emissions. 40% of emissions is eliminated due to the use of low-carbon materials such as wooden facades, beams, and and columns. In addition, 50-60% of the site will be dedicated to green spaces including a new urban forest.

Les Ateliers Cabot is a research, creation, and development firm with facilities dedicated to food production and distribution, highlighting pooling and circularity of resources that operate within a large urban green space. The winning project is a multidisciplinary team of Sid Lee Architecture, Ateliers Créatifs Montréal, Collectif Récolte, and The Centre for Sustainable Development.