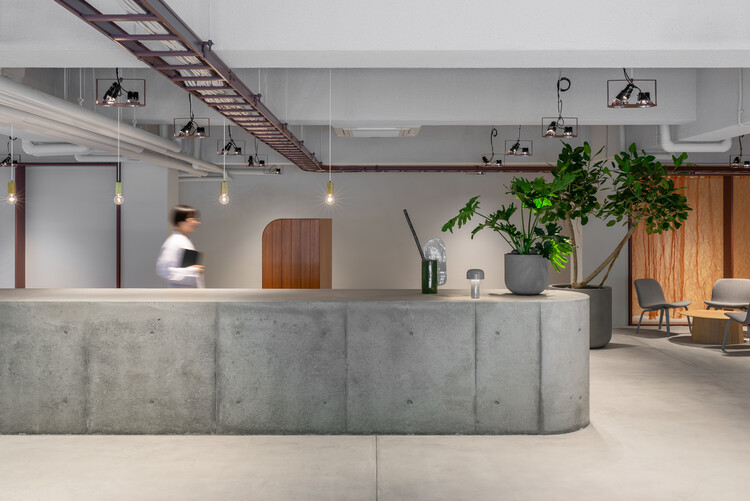 Text description provided by the architects. We designed the free address space inside the headquarters of Nippon Shinyaku, a pharmaceutical company headquartered in Kyoto Prefecture. It was planned for a corner of a vast site near Nishioji station, where several office buildings stand side by side.

To commemorate the 100th anniversary of the company’s founding, the project began in late 2019. However, it had to be stopped temporarily due to the unprecedented spread of the novel coronavirus. It was finally completed in the summer of 2021. Given the current environmental conditions, in which buildings do not face public roads, as they did in the past, we were conscious of the need to connect the interior, as it was left, to the exterior.

First, we increased the boundary between the inside and outside by incorporating diagonal lines ub the form of a V-shape for the glass walls, which previously ran parallel. Then, we made the boundary area between the inside and outside ambiguous by taking the floor tiles, which had originally been designed for an outside environment, and allowing them to overflow into the inside space, even biting into the V-shaped glass walls.

What’s more, the process of repeated expansion throughout the company’s long history turned the exterior of the building a reddish-brown. This view of the site and its colors express the ongoing process in this change in color, as though it is changing the building's interior as well.

In order to categorize the scene, we incorporated the idea of the “tsuzukiai” present in the sukiya style of building. Thus, steel frames that trace the outlines of the fusuma (Japanese paper sliding doors) are scattered along the span of the skeleton beams. As such, these walls are not just function, like ensuring privacy or sound insulation. Rather, they aim to create an open space while controlling the consciousness of lookers-on to emphasize the gentle form of the individual areas.

It is perfect for spending your time as you see fit. 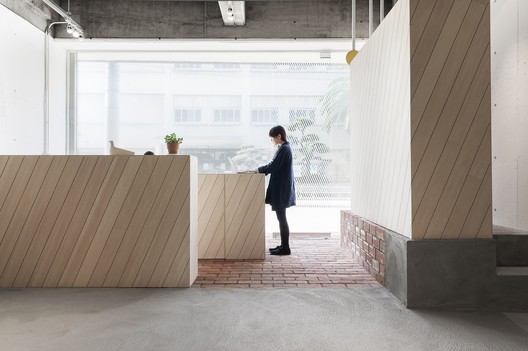