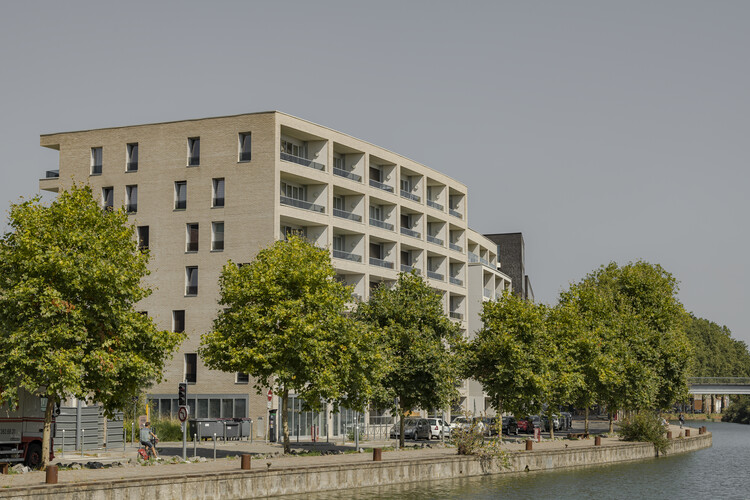 Text description provided by the architects. The first area to be completed of the Rives de la Haute Deûle development zone is a former post-industrial wasteland stretching over 100 hectares, located on the western edge of the city of Lille. The terrain, marked by largely varying scales between existing industrial, religious, and residential buildings, lies along the Deûle canal. The canal provides a gentle demarcation between this neighbourhood's southern and northern parts, both undergoing major urban renewal. The presence of a waterway, a powerful element in the landscape, is an important and enhancing asset.

The redevelopment of the district began with the renovation of Le Blan-Lafont textiles factory completed in 2009. Today, Euratechnologies represents a key site for the new neighbourhood, fulfilling the role of a start-up incubator and gaining a reputation as a centre of excellence and innovation in the fields of digital technologies and research. The overall development project, headed by Soreli with a master plan by Pranlas Descours Architectes and landscape architect Bruel Delmar, proposes various public spaces parallel with the canal, making the most of its presence. This urban pattern extends through the different 'function-defined plots' (îlots) positioned on both banks along with the green spaces. This urban grid links the existing neighbourhoods to the areas reclaimed from former industrial sites. Brick is the preferred material to be used, echoing the surrounding 1930s townhouses.

Îlot 13B, designed by KAAN Architecten, is located on the south-eastern edge of the first completed sector of the Rives de la Haute Deûle development zone, overlooking the canal and bordered by four public roads. The project comprises four buildings and functions according to mixed-use principles, assembling offices and housing within one project.

The two residential buildings are to the south of the site, with 47 social housing units for rent (building A) and 23 units for sale on the open market (building B). They stand out with their curving facades, which follow the sinuous line of the canal. The project dialogues harmoniously with the existing environment through the careful selection of contemporary materials, such as pale beige bricks, coloured grouting, natural anodised aluminium and glass. Protruding volumes, known as 'spines', are a modern reinterpretation of industrial bay windows and provide each apartment with direct views over the Deûle.

To the north of the site, the two office buildings (buildings C and D) provide extensive floor plans (800m2 and 420m2 respectively). Both buildings have been awarded 'good' BREEAM environmental certification for their energy performance. Characterised by pale grey glazed concrete facades with windows in bronze anodised aluminium, the offices reflect the beige tones of the neighbouring brick buildings.

The surrounding vegetation, consisting of a variety of ground cover plants, perennials and grasses, is typical of the Haute Deûle district and extends into the middle of the block. The green space on the ground level incorporates paved paths for easy pedestrian circulation.

The new neighbourhood of Rives de la Haute Deûle sets out to promote active circulation through carefully planned public space, both on foot or by bicycle. In keeping with this urban policy, Îlot 13B project encourages shared parking. Office parking is located in the neighbouring multi-storey car park, while residents' parking is within the block itself, in a private, covered car park on the ground level. 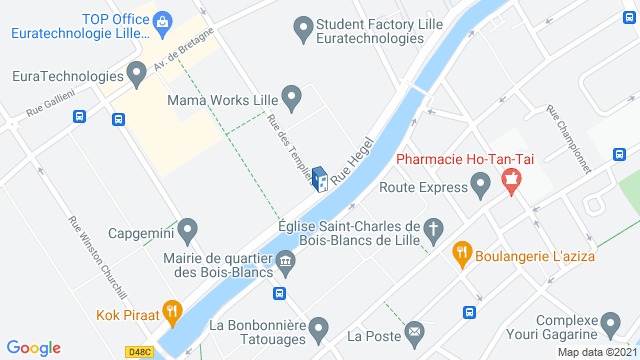 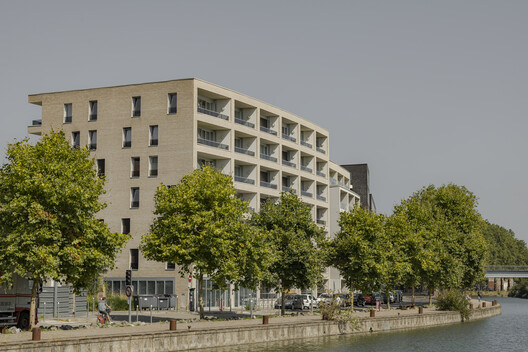