Save
The Wall of Being Residence / Evolving Radical Aesthetics 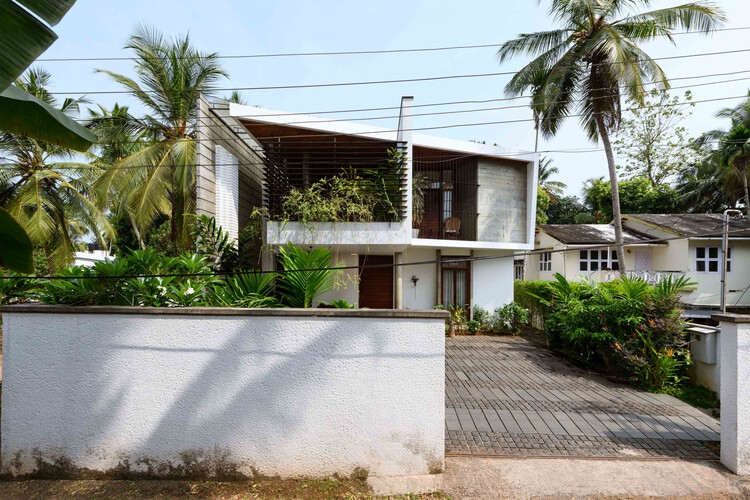 The Wall of Being - The residence stands at a y - junction in a dense residential neighbourhood of Kozhikode, a coastal city in the south Indian state of Kerala, on a linear plot deprived of views to the outside. The client’s personality embraces a modern lifestyle, at the same time are very nostalgic about their ancestral village of the central Malabar region. The process culminated in the idea of making spaces that evoke one’s collective memory of the region, at the same time relying on modern architectural characteristics. Further briefed to a concept of creating a “Modern, Abstract, but relatable aesthetics.

As a solution to ensure privacy, an inward-looking plan was adopted from which the idea of an abutting wall was conceived. Abutting wall –“The wall of being”, plays as a canvas depicting one’s roots and cultural background, from which the three-dimensional volume of the house emerges. A central axis is maintained in parallel to the “wall of being” at both the ground floor and the first floor enabling a seamless dialogue with all spaces at the same time establishing optimum segregation and privacy.

Volume - The presence of an abutting wall without any window openings at the west side of the house created the challenge of having cramped spaces. To tackle it, multiple indoor-outdoor double-height volumes were introduced and other spaces of the house are placed interspersing to it.

Spaces - The introduction of open to sky courtyard and koi pond evoke one’s collective memory of traditional houses of Malabar. The sunset garden between the courtyard and koi pond, on the first floor, beside a large opening to the west side, performs as an elevated portico at the centre of the house to enjoy the afternoon sun. The swing garden on the first floor overlooking the road is the place where one engages with the neighbourhood at the south end. Other primary spaces of the house are placed sequentially, interspersing the central open volume including the courtyard and koi pond. The very same central open space becomes the soul of the house from which all other spaces draws light and ventilation.

Textures and Elements - The overall character of the house lies in the contrast which was experimented with in the design in terms of textures, colours and concepts. The collection of vintage furniture and repurposed vernacular structural details such as units from traditional coffer ceiling, ornamented pillar capitals enhanced the contrast with the wall of being. The client’s background in jewellery making catalysed the application of intricacy in the design detail of the interior elements. The balance in contrast of the interior spaces to the wall intends to evoke nostalgia, contemplation and calmness in one’s mind.