This week David and Marina are joined by Jacob van Rijs, Founding Partner of MVRDV, Architect and Urban Planner to discuss the beginnings of MVRDV, working internationally, the office's structure and growing from 3 people to 300, creating a positive office environment (the MVRDV house), design process, having fun in design, MVRDV's diagrams, why clients hire MVRDV. 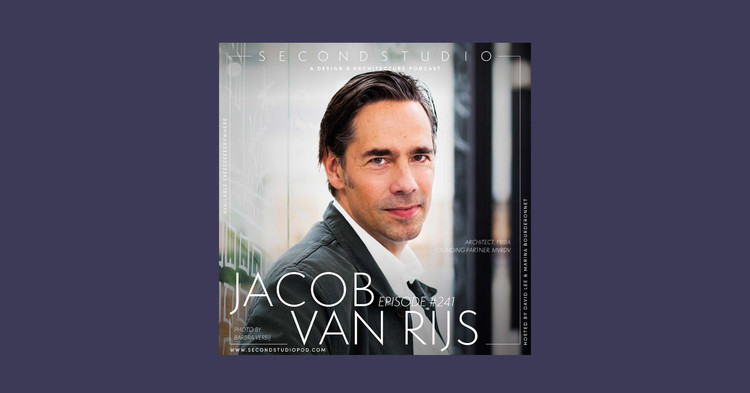 Jacob discusses his education and how he first became interested in architecture. (00:00)

“We got this grant and that gave some financial space to start up and quit our jobs. And there was nobody checking to see what you would do, so it was basically money you could spend. You could buy a car with it, but of course we didn’t buy a car. We actually made models with it!” (12:08)

“When somebody comes to work for us we give a crash course on MVRDV. […] But also, part of the company is that we definitely have an aspect of surprise… So we don’t want to get stuck into a typical story. We still call out the principles of our early work, like optimal use of space, density versus non-density, contrast between atmospheres, and collections of different diversities. All of these elements that were there in the early days are still there in the current state of mind. […] When you work for us you enter a certain world, not just a physical world, but also in terms of architecture.” (24:35)

The pandemic’s impact on the office, embracing working remotely, how the office is structured, and the importance of office culture. (28:15)

“We have different studios. We have about eight studios in the office and each is about twenty five people. They’re more or less functioning as an office in the office doing specific groups of projects… it could be a certain country or typology. We have an urban studio, a French studio, a German studio, an Asian studio, etc. These groups organize themselves like a cell-structure.” (29:32)

“One of the main issues for the staff is over hours. How can we tackle over hours? In the beginning [working overtime] was just ‘part of the job’. But now we are much better at organizing it. […] We realize that when we do this well it is beneficial. When you need to work extra, it’s no big deal, we understand, but it shouldn’t be a problem as well to say, “Hey, I just spent so much on time on this or that, I’m reorganizing my hours a bit, I’ll be leaving at 4 o‘clock everyday or taking two days off or one week off.” That’s in the system in the office. I’m quite happy we managed to make it a bit more relaxed. Of course people might listen to this and say, “Haha. Easy to say!” But we do listen to this and we try to make it not so crazy.” (32:52)

MVRDV’s design process and their work’s sense of playfulness. (35:34)

“Maybe there’s a looseness or open-mindedness to say, “Why not like this? And let’s have a fresh look at things.” People call it humor, but humor and architecture is a tricky combination, but maybe [for us] it’s kind of a relaxed attitude toward certain things. And indeed some architects can take themselves extremely seriously. In the time that we were in school, was when everyone was reading French philosophers… and of course we read them too but we were like, “Okay. What’s the real point about this? Other issues are more important.” So I think we try to combine different observations, regulations, or requests and invent this solution where you think, “Okay this is perfect. I’ve never thought about this, but now that I see it, that’s what I want.” That is the ultimate goal.” (39:06)

“Ultimately I think the spirit of the project is that it should be understood without knowing these kinds of things [the architectural rational]. That you enjoy without thinking too much. […] And later on maybe realize, “This is how it works. That’s an interesting story.” Ideally there’s a fun factor and it can be in the design or it can be in the use or in the process of making it. That’s what keeps us going I think. Fun might sound a bit light, but a certain excitement and joy is part of the work we do.” (43:15)

Designing buildings for different cultures and why more architecture will involve reusing existing structures instead of building new ones. (48:34)

Communicating architecture to non-architects, MVRDV’s diagrams, and the clarity of their buildings. (55:02)

“In the concept of a project, the storyline is there and after, if you are not able to explain yourself, the diagram should explain it for you. […] You can even make a movement yourself to explain the building. That could be the diagram. That is sometimes something we have to say, “Can you explain it in a diagram?” Is also a nice test to see if the project is clear or if there’s a logic that can be explained. And if you cannot make a digram out of it, then we think, “Hm. What’s wrong?”” (56:09)

Favorite types of buildings to design and why building types do not matter. (58:54)

Why clients hire MVRDV and not another architect. Not forcing ideas into a single project. (01:03:30)

Architecture ‘camps’, the architecture scene in the Netherlands, and the future of cities. (01:13:40)

“That was much more present before. That camp issue of, “You’re part of this or part of that.” […] Of course people make books and were labeled ‘Super Dutch’ and we were like, “What’s this?!” And you’re labeled as being part of this or that generation. I think some journalists and writers need that to organize their perspectives, but it’s not so much part of our daily lives.” (01:14:04)