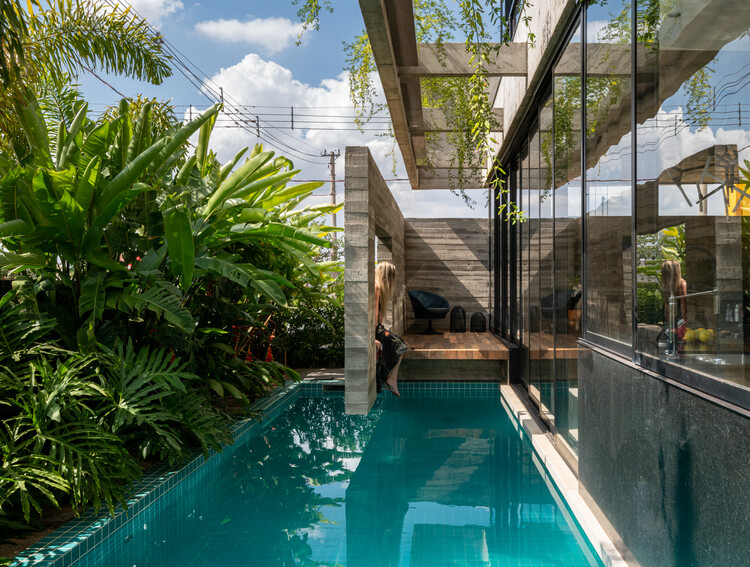 The GARTEN house was conceived so that the family could live within an immersive space correlative to the environments contiguous to the social space. We have set the upper floor aside for the intimate spaces related to the owners’ more introspective daily life routine. There, we will find specific environments such as the bedrooms and a special convivial lounge that also doubles as a gym, and as an audio and video room. Turning now to the bedrooms, we see that the master bedroom is in fact a suite, while two more bedrooms share a family hall with the lounge. This result of the deconstruction of the idea of having two more suites addressed the issue of usage of space, considering the size restraints of the plot; in addition, this bathroom already met the demands relative to the family lounge.

The correlation between environments on the ground floor extracted significant feasibility from the plot’s position, standing on a corner. This gave us the opportunity to explore the currently existing planialtimetric divergence, imparting upon the house a new dynamism inside social spaces, as well as housing a garage at a more subtle level when compared to the pavement, tangential to the house. For someone contemplatively going around the corner, either on foot or inside a vehicle, the house slowly but surely unveils its details: here we see an impressive and grandiose, and at the same time somewhat subtle, architectural environment, especially considering its proportion compared to the size of the plot, and its applicable constructive restrictions.

In terms of its architecture, throughout the process of creation and conception of the project, we have taken due care to develop it considering each issue as well as the desires of the owners. Its architectural environment is based on a discussion of Brutalism, also touching on a brief discussion of Minimalism, this being considered in terms of the specificity, materiality, and functions of the component pieces. However, in a nutshell, I see the house with its own identity, without assuming a specific style. Its main structure is composed of reinforced concrete, cast in loco, where it plays a sensorial and visual role, establishing nuances of tonality in its surface in an organic way. The constant presence within the environments intensifies sensorial broadness in the spaces, also subtly drawing our attention to the composition and correlation of the constructive elements.