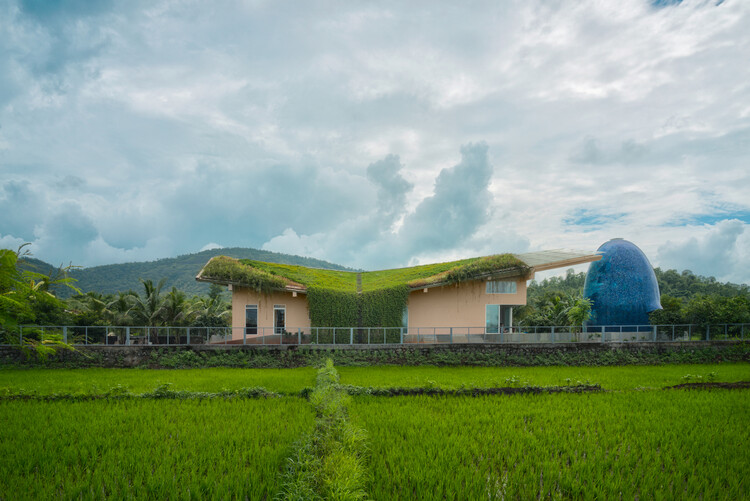 Text description provided by the architects. The client's brief was bold and direct “Make it inspirational and spiritual”. In addition to that, they were marked by a recent trip to the Netherlands, where the intensity of nature was striking and lingered on their mind.

The response to this demand began by analyzing the context, mainly focusing on ancient Indian homes, and the presence of a courtyard with the temple set on the Northeast corner of it. The idea was to reconfigure this spatial relation by moving the temple, thus reassigning it farther away, and modifying the energies within the space. The experience becomes one of effort and appreciation. The spiritual element is given its reverence while remaining close enough. It is a new visual and sensorial experience in its own right.

As we turned to the residential space, it was essential to reflect on its position towards the temple. The house had to bow to the temple, aspiring to it but never being able to touch it. This new activity changes courtyard proportion and function becoming more dynamic in feeling and energy. The courtyard disappears to be one with the site yet it lives in a new space under the protected cantilever of the house. There is now a different relationship between GOD, NATURE, & MAN and new energies of the CREATOR and DESTROYER are now set.

The flow became evident between the residential and spiritual realms, accentuated by the flooring pattern which radiates from the temple and merges with interior space gracefully.  As for the temple facade, it was conceived as an optical galaxy blurring geometries of volume and entry; daytime in front and night at the back. A whole rotation when you walk around it - from day to night - represents the earth’s path around the sun.

The Green Roof was also a bold element devised through a specific site study, considering the sunlight orientation. By law, any structure on this farmland could not have had a concrete roof, so we decided to build an aluminium green roof that would offer lasting protection against rooting and moisture-penetration while returning 30% of the rainwater to the natural cycle by evaporation. The roof retains many other characteristics of which:

The result is a vibrant and diverse array of greenery that organically flows with the temple's shell. The Sunoo temple house becomes an efficient, green and most importantly comforting space of inspiration and spirituality. 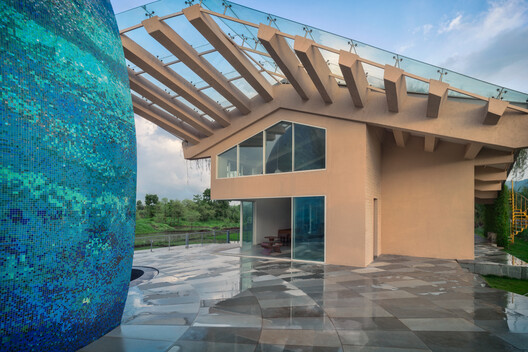 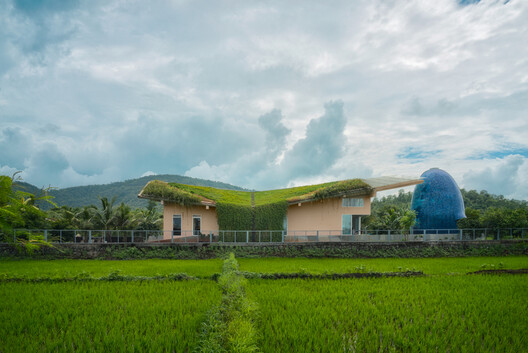