Text description provided by the architects. In Takaoka, Japan, the Japanese architectural office UNEMORI ARCHITECTS has completed an inventive and cleverly structured one-story house, called House in Takaoka, designed to resist severe climate conditions. Located in the Toyama Prefecture, where harsh winters bring deep snowfall, short daylight hours, and high humidity, the house is built on stilts to prevent flooding, allow for air circulation, and prepare for snow accumulation. Divided into three building bodies, the one-story house features large, skillfully positioned windows that allow for maximum daylight whilst facing away from the neighboring houses. With House in Takaoka, UNEMORI ARCHITECTS showcases an architectural solution for flood-threatened areas with difficult climate conditions whilst realizing an appealing, bright, and comfortable home for a family of four.

Designed for Harsh Climates
Located in the Hokuriku region in the north of Japan’s main island that is known for its harsh weather conditions, House in Takaoka was built on a deep lot in an old district of Takaoka, with a neighboring house and a warehouse abutting the property on the north and south side. Contacted by a couple with young daughters, UNEMORI ARCHITECTS was requested to build a bright and comfortable house with a closed courtyard.

The architects reacted to the challenges posed by flooding from the nearby river as well as harsh winter conditions like deep snowfall, short daylight hours, and high humidity by elevating the entire building 700 MM off the ground. The one-story, 112sqm three-part building was put on stilts to prevent flooding, prepare for snow accumulation as well as allow for air circulation to the courtyard and surrounding areas.

UNEMORI ARCHITECTS shifted the position of each room, specifying different floor heights and raising or lowering the roof accordingly to spatially visualize the distances and relationships between the various rooms. For example, a corridor is built closer to the ground, resembling an „engawa“, the edging strip of non-tatami-matted flooring leading around traditional  Japanese houses. A children‘s room was built floating in the air like an observation deck while the living room is overlooking an expanse of land and sky at the same time. All windows are positioned to bring in as much light and air as possible while facing away from the neighboring houses.

Structure & Materials
UNEMORI ARCHITECTS realized House in Takaoka featuring an interplay of reinforced concrete and wood for the interior. For the structure of the House in Takaoka, reinforced concrete columns were employed that are supporting the wooden roof beams. The floors are suspended from the roof beams, leaving the underside of the building open, thus creating a line-of-sight underneath. Round columns resemble utility poles, large beams that are crossing the rooms as well as occasional thin steel suspension columns. Structural members of different materials and scales intersect horizontally and vertically, and the house seems to float above the expanse of ground, while certainly standing firm.

Building the house elevated on stilts and without a foundation leaves an open space for further modifications, offering a range of possibilities for the future. 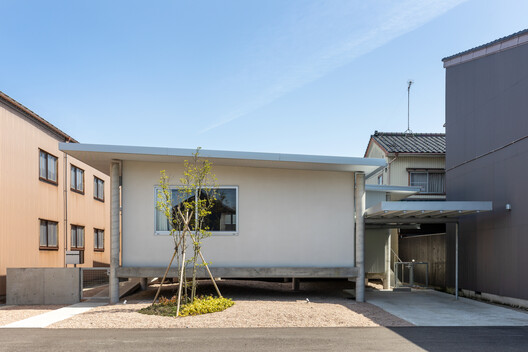