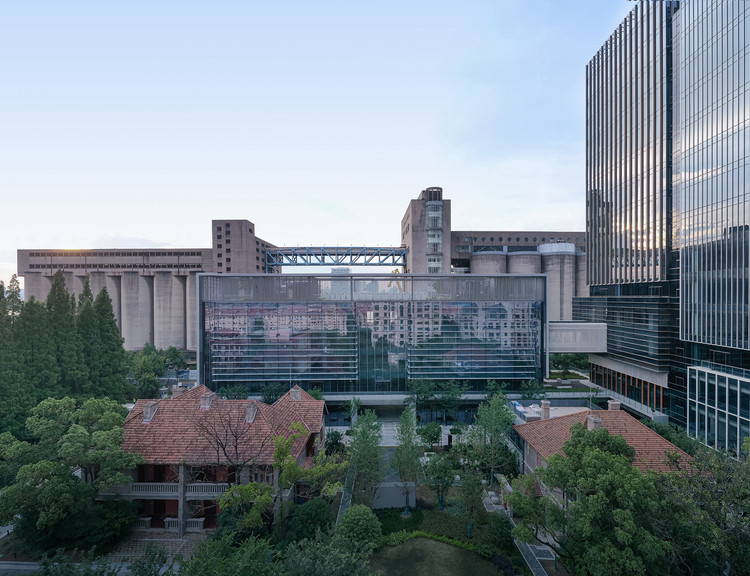 Urban Regeneration. The juxtaposition of these chaotic and complex urban conditions reflects the urban reality of the evolving city of Shanghai. By carefully addressing the complexity of these site conditions, the design of Minsheng Wharf Block E15-3 reestablishes a spatial order for the wharf. Negotiating with an L-shaped site configuration, the master planning includes not only new addition of office building but also a temporary pavilion for arts and communal activities, along with the renovation of three historical colonial houses.

Working with strict site constraints, the organization of the new addition stems from the spatial relationship with surrounding buildings and the urban environment, the solidity of the building is as critical as the voids. By correlating the massing and voids with the existing urban fabrics, a spatial fugue is created with new meaning and purpose, reactivating the industrial waterfront district.

Urban In-fill and acupuncture. The design ambition does not lie in creating an eye-catching spectacle building, on the contrary, it is intended to address the urban conditions in a restrained manner, providing a monolithic, minimal building responding and correlating to the surroundings. Inspired by the vertical rhythm of the silos, the building massing is articulated into four vertical tiers. To maximize the views towards the river and Lujiazui Financial District skyline, an offside core layout is adopted. A lower wing of the office/retail places between the opening of the silo warehouse to allow for better river view and frontage. It also creates a pedestrian-friendly urban experience.

Porosity and permeability are introduced to the massing allowing for connectivity and interaction between the street and enclosed courtyard. Inside the office space, the design optimizes the overall height and creates a small floor plate ideal for daylighting. A series of landscaped gardens and terraces are placed throughout the office building to offer outdoor activity and interaction. In addition, the low-rise wing of the building addresses the preserved historical colonial houses, forming an intimate street scale within the courtyard side of the block.

The superimposing of old industrial buildings and new architecture created a space-time dialogue with the waterfront sites. It's a dialogue between the new and old, history and modernity, preserving and inheritance. Some design features are inspired by the surrounding heritage buildings in terms of scale and materiality, the tower and the podium are connected by a slender horizontal corridor, which not only facilitates the circulation in the building itself but also pays tribute to the industrial elements of the silos on the wharf.

The counterpoint in architecture and the framed scenery in Chinese traditional gardens are also apparent in this project. The four vertical volumes of the tower correspond to the verticality of the silo; the high on the east and low on the west section echo to the scale of surrounding buildings; the clear geometric division of the horizontal and vertical grids on the building facade takes cues from the rich attributes of the industrial site...In the voids of the new building, with a casual glance, tenants and visitors could get clear views of the surrounding landmark buildings, and the old and new are mutually framing views to each other.

Materiality, façade articulation. Unique from the traditional office building, Minsheng Wharf Block E15-3 selected Moroccan gray limestone and pressure-treated wood panel for podium base storefront facade, which is consistent with the concrete material palate of the silo; meanwhile, the vertical grooved line details on the tower façade adopted warm-tone material such as metal copper, which reflects the materiality of the surrounding historical building.

Further down the road, in addition to Minsheng Wharf Block E15-3, the architect also designed a clover-shaped temporary exhibition center and a renovated office building. While fulfilling the functional requirements of the buildings themselves, this project not only improved the urban fabric and structure but also activated the previously deserted urban environment.

These interventions have connected new commercial spaces, cultural/communal venues, and residential neighborhoods along the riverside. Through strategic urban in-fill and acupuncture, Minsheng Wharf is becoming a lively urban hub and cultural destination. 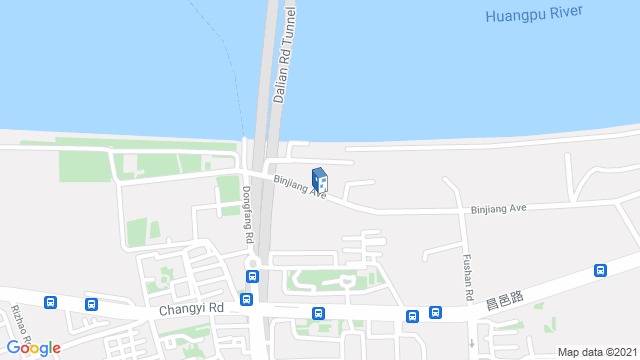 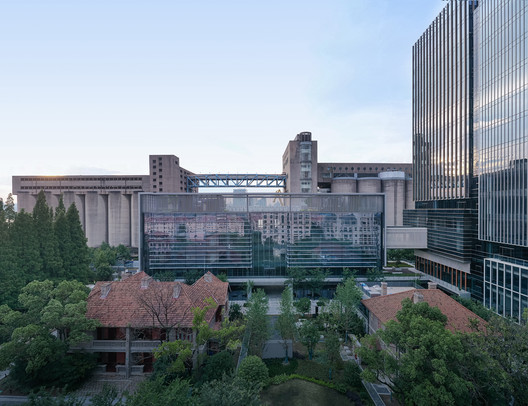