Snøhetta has revealed the latest version of its reconstruction plan for the traditional Knubben Harbour Bath in Arendal, Norway. Originally built in 1937, the structure was representative of both the period's functionalist architecture and the recreational facilities created in Norway at the time. Snøhetta's proposal reinterprets the original design, conserving its clean modernist lines and most distinctive features, while creating an artificial topography reminiscent of the islets along the Norwegian coast, thus creating a new leisure destination for the city of Arendal. 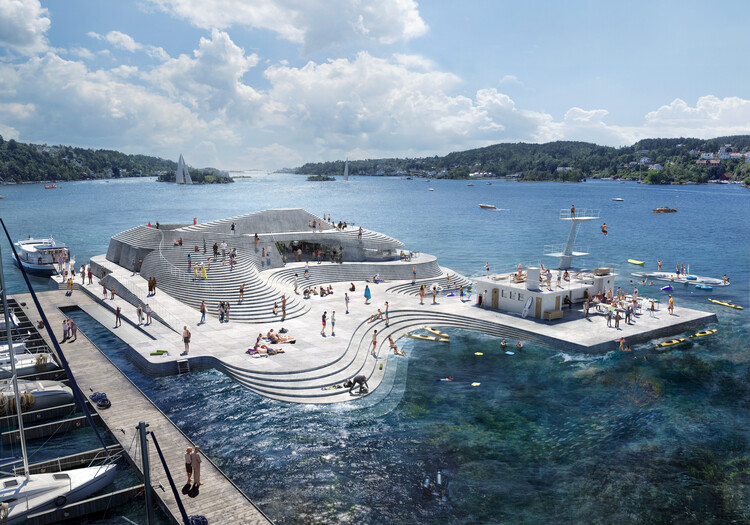 Originally designed by architect Ketil Ugland, the project was the venue for swimming training and diving competitions until 1947 and featured a diving platform, a children's pool, changing rooms and a kiosk. The structure opened its doors again in the 1960s as a jazz club but was eventually demolished in the 1980s after falling into disrepair. Initially intended as a restoration project, the Norwegian design studio's plan evolved to broaden the island's possibilities, creating a multi-use site.

Snøhetta's design features a structure with concave and convex walls resembling a block of stone that rises from the water on steel piles. In order to faithfully render the idea of a landscape, the construction will feature various horizontal layers expressing the topographical contours on a map. As a year-round destination, the project will comprise an open-air stage, an amphitheatre, as well as an indoor area housing a restaurant and additional performance spaces, thus accommodating a wide range of events.

The new Knubben is set to become the stage of numerous activities, from sunbathing and swimming, to dining and cultural events, creating an intimate relationship between nature and urban life. The project will open its doors to the public in 2024. 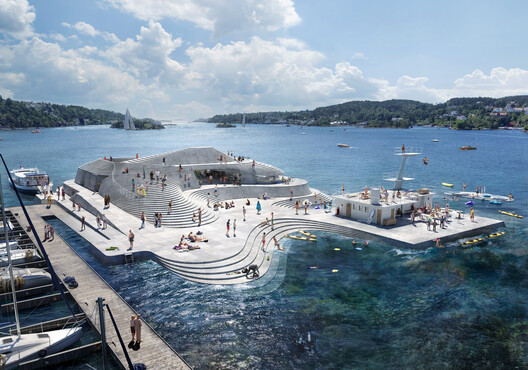