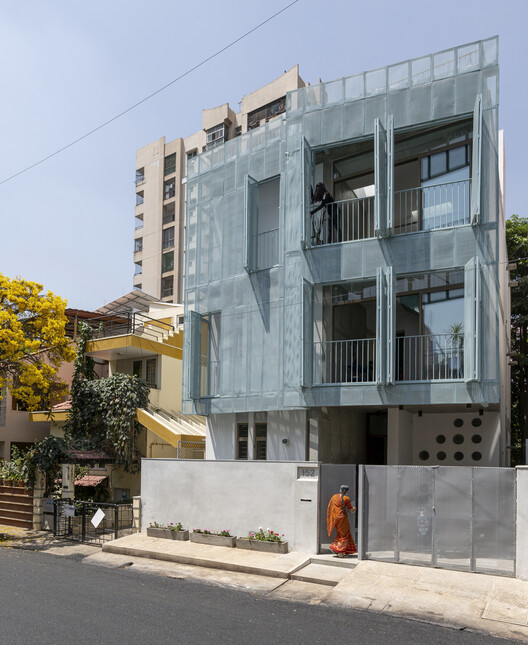 Text description provided by the architects. Built on a compact 180 sqm site, the house is distributed on three levels and includes two interconnected apartments; living, working and studio spaces for the family of an illustrator on two levels, and the ground floor housing their elderly parents. The street-facing front side of the house is sheathed by a light blue perforated screen. Incorporating a system of openable panels this screen allows the house to breathe and respond to the flows of nature, daylight and conditions outside.

The daytime spaces, including a double-height living area, are oriented towards the eastern street side of the site, filtered by the screen, while the nighttime spaces overlook a lush public garden on the west side. The interiors feature a stark palette: White walls, Polished cement and minimal wooden accents.  A bold exception comes in the form of a teal-coloured sky-lit stairway, seemingly watercolour rendered, travelling through the different levels and adding a striking yet soothing highlight to the spaces.

The daughter’s bedroom on the first floor features a balcony created as a micro version of the front façade, a cosy pod extending into the tree canopy. The top floor of the house has a music studio and drawing studios for the clients. Between the studios, sliding glass doors lead to an open sky court and a stairway leading to the rooftop terrace. This floor offers itself to different possibilities, as an event space, space for workshops or for play.

The perforated metal façade is envisioned as a “filigree”; it incorporates simple but sophisticated detailing to retain the ‘lightness ‘of the element while using readily available metal sections. The custom screen system was realised through close collaboration with a fabricator, who has a passion for detail in metalworking. An exercise in balancing performance with minimal, essential and rugged detailing, craft plays a role here as much as engineering.

Architecturally, the façade is designed to expand the living areas of the house beyond their walls. From inside, the deck enclosed by the screen becomes an extension of the family’s activities and their moods: opening fully to the theatre of the street outside, selectively or closed entirely to create a private space washed in dappled light, suspended between inside and outside. From the street, the house becomes an interesting and sometimes provocative addition to the series of houses that line both sides, packed tightly alongside each other. Composed as two planes set at differing angles, the screen is perceived differently depending on the sky it is reflecting, sometimes a solid plane, sometimes a translucent skin.

The parameters that structure this project and site are common to most tight urban residences in cities like Bangalore. Concerns like security and privacy need consideration as much as light, ventilation and energy efficiency. We approached this brief with an intent to create a framework for enduring luxury in domestic space not defined by the cost of materials used but through natural light, quality of space and adaptability by the inhabitants.