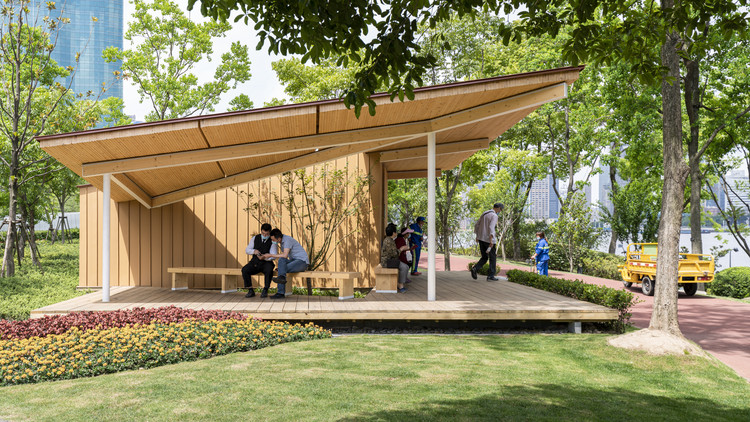 Text description provided by the architects. In the Project on Public Space Connection of both Banks of Huangpu River, 22 River View Service Stations have been constructed in the 22 km long riverside public space of the East Bank of Huangpu River. These stations have been widely praised in everyday use and visit, which proves that as new urban infrastructure, the public service stations play a crucial role in improving urban public space quality and participation of citizens. For better public service, the Municipality of Pudong New Area put forward the idea of building an additional River View Service Kiosk in about one kilometer spacing between every two service stations. In other words, there will be a service station or kiosk every 500 meters in the riverside of the East Bank of Huangpu River. Based on such an idea, the Municipality decided to build No.2 kiosk, No.3 kiosk, and No.4 kiosk as three experimental kiosks between No.2 and No.5 River View Service Station.

Two slender round steel columns were set up to support the entire roof along with the restroom enclosure. Due to a significant reduction in building scale, the height of the cornice must be lowered. As a result, the unidirectional purlin roof used in River View Service Station will be too thick. Therefore, to make a more direct expression on structure and tectonics, a seemingly lighter (actually heavier) NLT flat roof system is adopted. Also, some exposed side wood-paneled main steel beams are used as a visual transition between roof and columns.

When the standard architectural form is placed in the specific site, it is still necessary to keep full interaction with the surrounding environment through subtle terrain adaptation processing, and strengthen the characteristics of every single site, so that the Kiosk can continue to be a “landscape amplifier”. No.2 kiosk and No.4 kiosk are respectively located on a wooden platform over green space. Both platforms face toward the Huangpu River and are close to running tracks, but they are built on slightly different terrain.

No.3 kiosk is located on a small rigid paving hathpace at the end of the terrace garden and Moon Bay valley. The site, where three riverside tracks meet, is designed in face of riverside view with a set of big steps and completely occupied by the Service Kiosk. Hence, the Kiosk is designed by rotating 90 degrees, so that the restroom is moved close to the boundary of the retaining wall at the back of the site, and the rest area on the hathpace is turned into an observation deck surrounded on three sides by river view.

The kiosk is directly set on the original pavement rather than being overhung. The triangle patio is covered with a polycarbonate panel as a skylight. The river-view long bench against the enclosure of the restrooms is set below the skylight. This design not only has enlarged the effective space of the rest kiosk but also has considered both passersby and visitors who want refreshing rest and to admire the scenery in such an excellent river view platform. 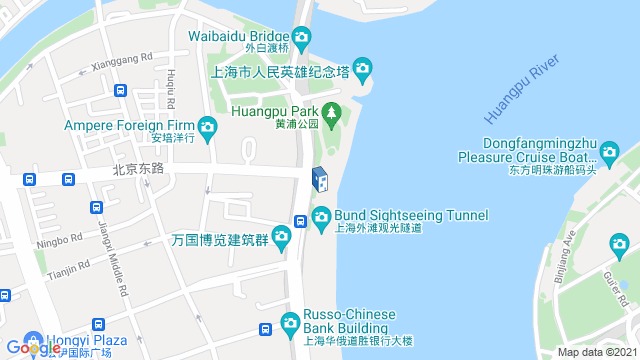 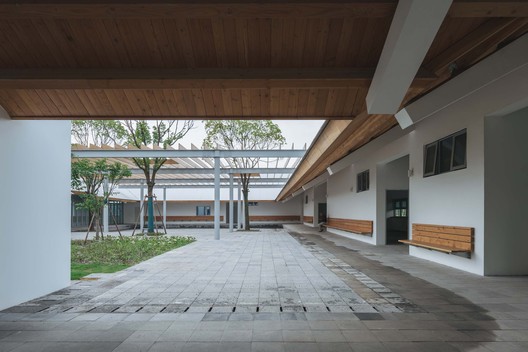 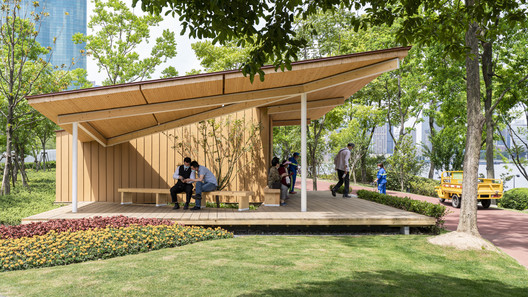