EFFEKT has won the competition to transform an urban block occupied by a decommissioned editorial office and printing press of the regional German newspaper Kieler Nachrichten. As digitalization has rendered many of the existing newspaper production facilities obsolete, the KielHöfe project aims to redefine the publication’s urban presence by incorporating various programs meant to drive the revitalization of Kiel’s city centre and shape a new cultural destination. 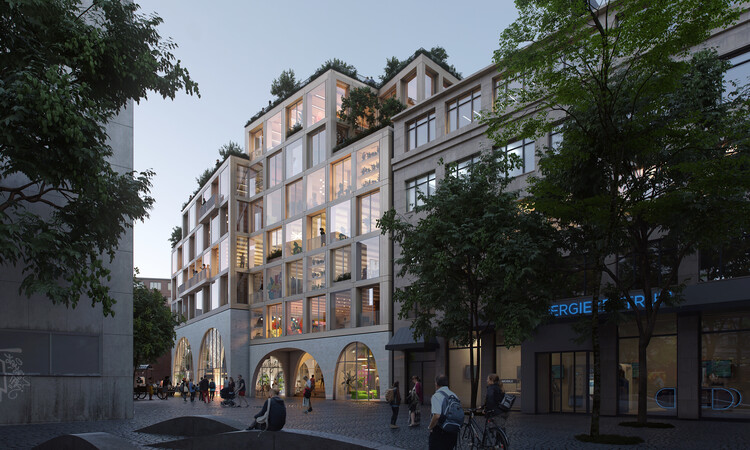 With a history of more than 100 years, Kieler Nachrichten newspaper used to house all aspects of production, from editing and printing to distribution within one city block in downtown Kiel. The project designed by EFFEKT aims to create the framework for a mixed-use “living hub”, where the publication’s program is interwoven with cultural and community-oriented programs, thus creating a platform for the makers and creatives of Kiel.

Featuring 11.000 sqm of mixed-use, KielHöfe transforms the existing buildings while adding new programs within new timber structures. Creating a dialogue between the modernist city and its historic urban fabric, the design reinterprets the existing architectural language through the adaptation of details, ornamentation, as well a the choice of materials. The ground floor contains public functions like meeting facilities, a food court and event spaces, while offices and co-working spaces occupy the subsequent levels.

The existing printing press is transformed into an event space, featuring a lobby that connects public spaces at various levels on the site. In addition, a series of publicly accessible roof gardens and a conservatory cater to the project's social agenda. The courtyard mediates the elevation difference between the adjacent streets, creating new pedestrian flows and opening up the urban block and its activities to the public 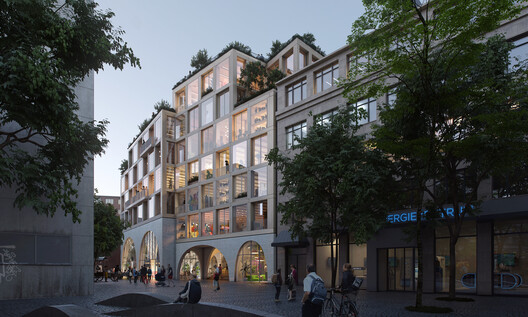