Save
Aedas Designs Mixed-Use Development in Shenzhen
Share
Or
Copy

Aedas has revealed its design for Shirble — The Prime, a new mixed-use development that would revitalize the Ba Gua Ling industrial zone, a central area of Shenzhen. The design features a retail podium from which one office tower and three residential ones of various heights rise, connected by a sky-park at 150 metres above the ground. The high-density development aims to respond to the city’s demand for housing while bringing multiple aspects of urban life into one building. 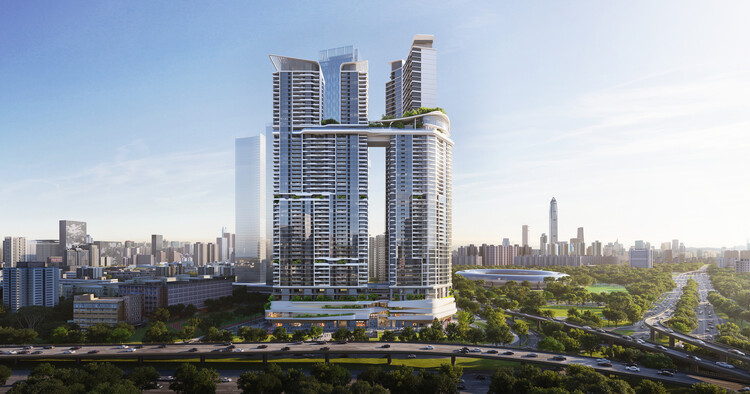 Featuring large scale urban infrastructure, Ba Gua Ling is a former printing industry hub now characterized by vacancy and lack of investment. As the city of Shenzhen continues its accelerated urban renewal, the area is now the focus of regeneration plans. The design proposed by Aedas is shaped in relation to the surrounding landscape and transportation network, maximizing views and cross-ventilation. As stated by the designers, the crown of each tower is a reference to the open wings of the Peng bird, a nod to Shenzen’s prominence.

The residential towers feature various unit sizes, from small lofts to large apartments. The sky-park provides a communal space for the residential program, encompassing a sky garden, gym, clubhouse and other recreational facilities. Social gathering spaces can also be found in the retail podium, together with indoor-outdoor areas that would cater to the residents as well as the local community.

Regarding the architectural image of the project, the residential towers feature curved balconies with silver-white aluminium finishes, while the office building showcases a minimalist curtain wall. The design is optimized for maximum cross ventilation while a lighting strategy is employed to avoid glare. Biophilic design elements are introduced through the green roof, the podium garden and indoor green walls.