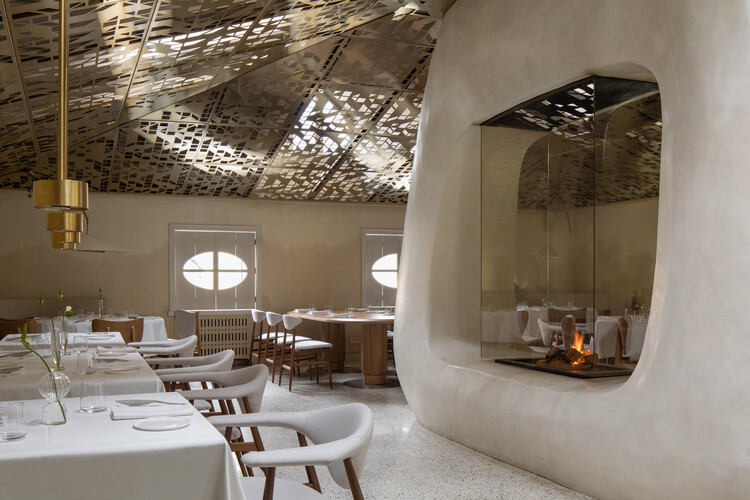 Text description provided by the architects. A small two-story mansion with the shaded terrace in Trubnikovsky lane. And the first fine dining restaurant of signature dishes by Arkadiy Novikov in partnership with chef Atrem Estafev. Embarking on the project, we were astonished at the uniqueness of the client's vision which was not made up of clichéd models of already existing restaurants.

The two worlds were presented to us. The ground floor depicted the Dark world. Roots, soil, and the earth itself in its richness. The first floor served as a portal into Light world, glowing and airy. A stunning staircase layered with brass sheets bridges these transition stages. One of the idiosyncrasies is the Russian avant-garde kitchen where the dishes are served on handmade ceramics. Having been commissioned with the task of such scale, we fully immersed ourselves in the elaboration of the worlds.

First, we needed reference points. The rootedness of the ground floor developing into the light world. That's how we came up with the idea of the chef's table for 10 people with its roots. And on the first floor, we wanted lightness and dance with space. So Arkadiy and Artem brought forward the concept of a fireplace as a centerpiece. The ground floor with its lumpy textured wall is a quintessence of earth. The shutters which bear resemblance to mushroom caps trick you into thinking they grow out of the restaurant walls. The brass-patinated kitchen islands create the analogy with metals buried deep in the bowels of the Earth.

Bespoke chef's table sprouting from the floor with its roots are made up of eight fragments of fallen trees stumps. The ideal wood brought from the North Caucasus was meticulously picked, polished, and topped with a wild pear slab to complete the custom-made signature table. The sculpture bench in the entrance lobby is a totem between the two worlds. Dark woody hues of the ground floor and light tactile shapes of the first floor. Rich matte walls are accompanied by a glossy mirror -an masterpiece by Christophe Gagnon- which amplifies the mysticism of the space.

'Dance' with the upper space went hand in hand with the ground area.  Arkadiy Novikov and Artem Estafev themselves were fully involved with the collaborative work.  We proposed to center the space around the sculpture, the starting point of the project and found it crucial to thicken the space into a massive entity, which is simultaneously malleable and light, shape-wise. This concept brought us to the oeuvre of Henry Moore and Isamu Noguchi.

We were simultaneously working on the watercolor walls and the shape of the furniture. What we were striving for was warmth and the kinesthetic nature of the room. This determined the choice of light upholstery as a symbol of this world’s transparency, amicability, and responsiveness. Customers’ comfort in the soothing and ambient atmosphere of the first floor was of the utmost importance for us. All the furniture with an exception of chairs was custom-made by our ideas. We wanted to put final touches on calm and subtle object d’arts, so we opted for black and white film photography by Alexander Guyvoron, a photo artist who takes his pictures on the island of Sakhalin.