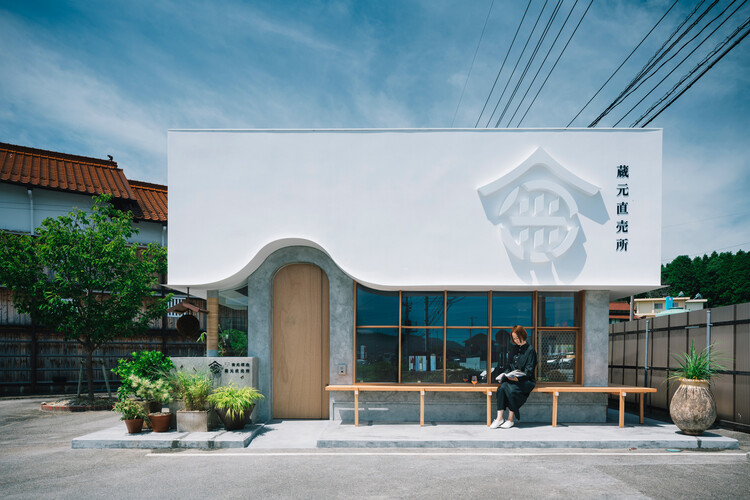 Text description provided by the architects. Located in Kurose-cho, Higashihiroshima City, Hiroshima Prefecture. The project is the renovation of the direct sales office of Kanemitsu Sake Brewery, which has been in business since 1898. When I first saw the large wall of the sake brewery, a registered tangible cultural property visible from the national highway, I felt as if I were looking at a stratum of layers of the history of sake brewing.

The paneling of burnt cedar, the plaster, and the red brick roof, some of the characteristics of the town. As the three materials overlap, two lines appear at the boundary between them. A beautiful horizontal line created by preserving and accumulating tradition for a long time. For the adjacent direct sales shop, while keeping in mind the horizontal line leading from the sake brewery, a new line was created in which a portion of the building rises organically.

The eaves of the existing building, which were slightly protruding, were made more voluminous in the downward direction to create a new line. Since sake is said to have been first made for the gods, we used plaster to create a space reminiscent of a shrine or Buddhist temple. By raising the line at the entrance, which is the starting point of this space, I hoped that it would be the starting point for all the visitors to add a new page to the tradition and history of the brewery.

The other line is centered on the entrance and divides its functions into left and right. On the right side of the entrance, there is an L-shaped bench with the same function as a veranda, based on a reference to a liquor store in the early Meiji period that had a veranda directly adjacent to the street. On the left side of the entrance, the window sill is sharpened by hand, and glass bottles of sake, which were to be discarded, are crushed, mixed, and sharpened so that the modern technology of glass is sealed like a fossil in the strata of history.

In the interior space, different materials are used to form an organic R-line, expressing the invisible vibrancy of life in the transparent liquid that I felt when I saw the bubbles overlapping and multiplying in the fermentation tank. The materials used in the brewery, such as the bricks of the chimney, the indigo-colored apron worn by the toji (chief brewer), the copper plate, and the tortoiseshell wire mesh, are naturally used in the brewery but are converted to different uses.

A small "bulge" is created in the calm horizontal line surrounded by fields. I believe this is a reflection of the Toji's desire to continue to challenge new vistas while preserving the long history that has been passed down to him. It is my hope that these feelings will spread like ripples from the newly created bulge, like an antenna. 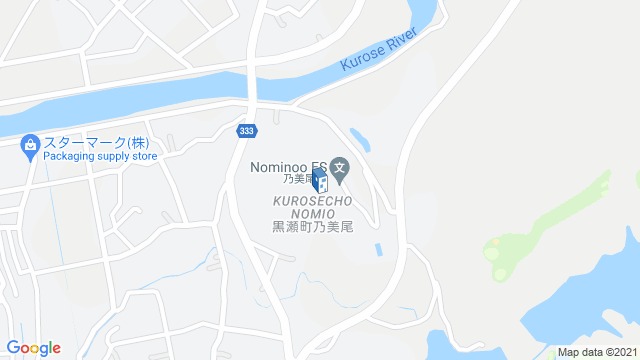 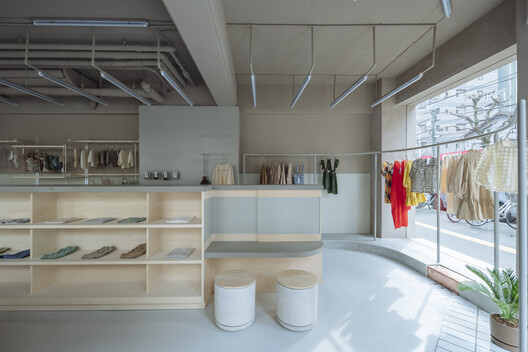 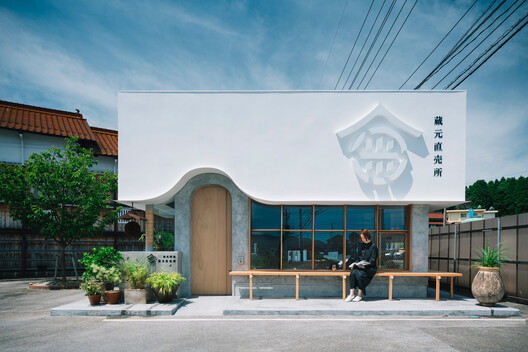