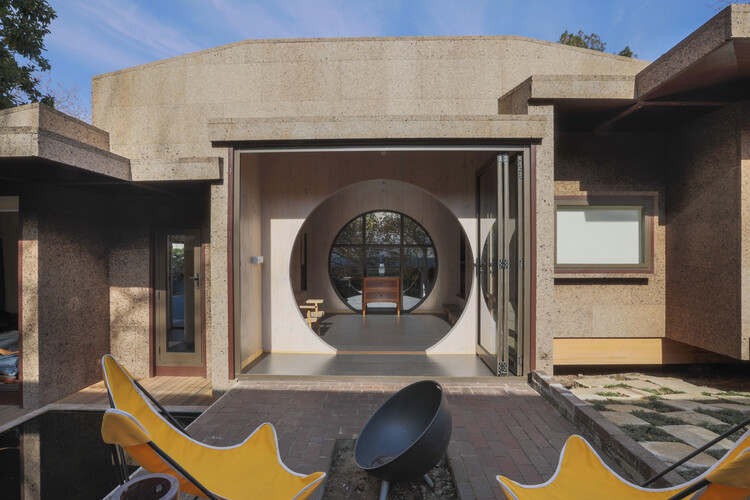 Text description provided by the architects. The submitted work is a cork-clad, mass timber house built on a relatively inaccessible site, the subdivided portion of a house designed by Julian Elliott. The site is 13.5m meters wide and 30m long. The short side is at the end of a cul-de-sac. There is a river running through the site. Prescribed setbacks from the river and the back wall allowed for a 4.5m deep floor plan.

The original build is the garage of the original house which became my mother’s pottery studio. It is built with bagged brickwork and has a vaulted roof, definitely, Corbusier-inspired! A glass and steel studio was added some thirty years later and my father worked from there until it was turned into a granny flat where my parents lived out their lives. Our mass timber addition on the other side of the river stretches the full width of the site. It is elevated and steps down in three platforms due to the sloping site.

Mass timber was chosen as the building material for its carbon-neutral credentials, ease of erection, and health benefits. Due to inaccessibility, the CLT floor, wall, and roof panels were lifted over the existing house using a crane. Cork was chosen as the cladding material as it is water repellant, UV and mold resistant and have excellent insulating and acoustic properties. Used to clad the walls and the roof it gives the house a monolithic appearance.

The plan layout resembles a Japanese townhouse of the Machiya type found in Kyoto, in that it is a collection of pavilions connected by courtyards. A pleasant result of the additive building process is movement space. One moves through the existing house and arrives at the garden at the back through series of surprising spaces, the whole being revealed only at the end of the journey.

The front of the house is a carport/workshop, office, guest room, and bathroom. Utilitarian, it is seen as a public space, and entrance to the rest of the house is by invitation only. The middle of the house is a gathering space for dining and living: a family room. It has a patio out to the west for grilling and alfresco dining.

There is a covered bridge/deck connecting the new to the old which can also be used for outdoor entertainment. Crossing the river court you arrive at the new house which is more private and contains three bedrooms, two bathrooms, a library, and a multi-purpose room opening out onto an outdoor living area. At the back is a zen garden with plants and water features. The painted shared wall has a graphic by Sengai, a Japanese Buddhist monk called Sengai’s Universe. Square-man, triangle-aspiration, and circle-enlightenment. 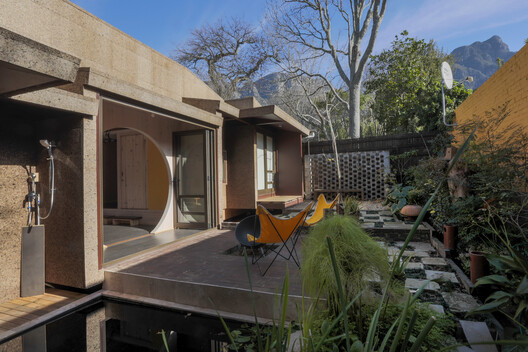 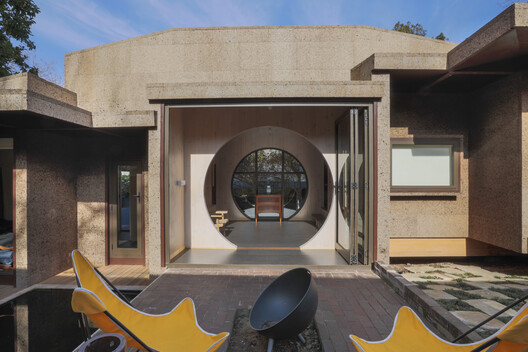