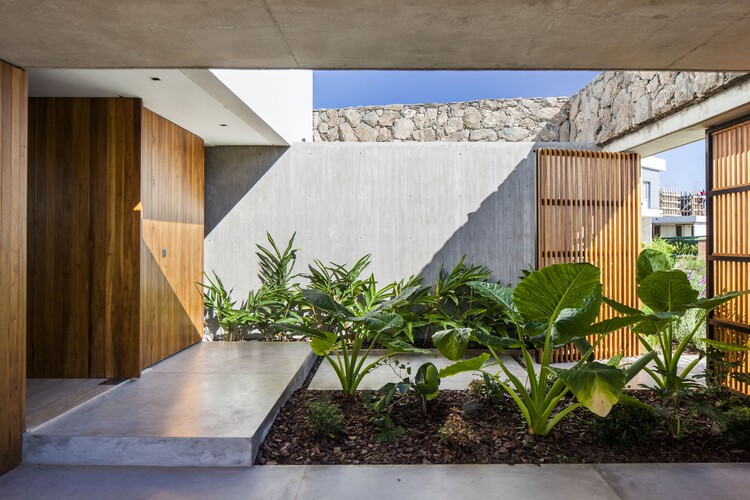 Text description provided by the architects. The project is located in Tigre, Buenos Aires, Argentina with a Northeast orientation and direct visuals to the central lagoon of the Virazón neighborhood in Nordelta. The goal was for the house to have an impression that would generate a pure and clean geometry, enhancing the nature of the environment and respecting the privacy of the proposal.

Casa Grava was projected as a massif with its personal and tectonic imprint. Regarding the search of its materiality, the choice of stone on its exterior was prompted by a nostalgic idea of the client, generating a design starting from the idea of the settlement of a stone. Conceptually we started from a heavy base, with the stone as the protagonist that identifies the place, a lighter upper floor, and different perforations that were generated to capture the best orientation.

The house is developed on two floors, the ground floor is perceived as a large volume with openings that generate internal courtyards and an access courtyard. All these voids are designed to capture the best light and to generate different enriching situations for the users. Casa Grava uses a duality between the contrast of interior and exterior materiality. The ground floor is perceived as a massif, the stone manages to enhance this idea but its interiors are light, permeable with a suspended white ceiling that helps to reinforce this duality. On the second floor, a concrete slab creates contrast on the inside.

The route of the house is one of the most important issues, prevailing the simplicity of the circulation. From the access, there is an uninterrupted route in this very fluid house that is hermetic towards the street, but once one enters, that hermeticity disappears. This route experiences the landscape through the windows. By being uninterrupted it achieves a connection with nature generating a play of light and shadow throughout the day, accompanied with a projection towards the water that was one of the most important aspects to capture.

Openness and a relationship with the environment were central to the project. One of the challenges was how the exterior could enter the interior of the house. Due to the proximity to the delta, it was very important that that exterior would be inside the house. Several voids were generated to allow the entry of vegetation even under the staircase, highlighting the feeling of fluidity between the interior and exterior. As one enters the house and passes through it, one discovers that there are different instances and green spaces within it, even on the second floor, as a terrace was created connected to all the rooms to remain in close contact with the fluidity of the vegetation.