Save
Monte da Caliça House / A+ 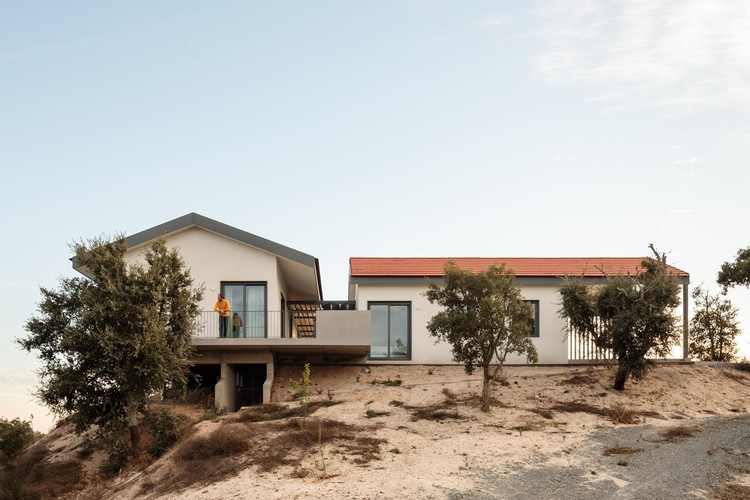 Text description provided by the architects. The ‘Monte Alentejano’ is a vernacular housing type found all over the Portuguese Alentejo. These ‘houses’ have a simple saddle pitch roof, an imposing chimney and generally sit as a long volume on the top of the hill (hence the name ‘monte’). The term ‘monte’ can also be used to refer not only to the main house of the farmer or the estate owner but also the outhouses and other functional buildings that were close to it.

This project was developed for a private client with a strong interest in sustainable technology. Influenced both by a desire to build an 'eco house' as well as the constraints of working within such a remote location, at the top of a hill in the centre of the Serra de Grândola, the house was designed to be fully self-sufficient, generating its own electricity, harvesting the water the land had to offer and disposing of its own waste.

From a design point of view, the project was for us driven by the attempt to re-interpret the vernacular form of the 'monte', with their long white walls and striking chimneys, which dot the local landscape.

A flat roof for us seemed out of place in this context and therefore the white rendered ETICs walls are covered by simple pitched roofs with modern, flat clay tiles alluding to the typical neighbouring buildings, whilst allowing us to incorporate contemporary technologies.

The project consists of two volumes connected by a steel pergola structure in a west-facing 'L' shape revolving around the pool and deck area. The main house comprises a generous open-plan kitchen/dining/living space and three ensuite bedrooms. The guest annex includes two ensuite bedrooms. Due to strict forest fire laws and hilly terrain, the buildable area became quite constrained, pushing the house to have to cantilever/overhang of the hill, which created an unexpected perception of a floating house from afar.

Comfort in homes in the Alentejo traditionally came from thick external walls, but this house's temperature is regulated by the energy-efficient building fabric, coupled with passive solar shading from generous roof overhangs to prevent overheating, combined with an active solar-panel run system of underfloor heating and radiant cooling ceiling panels.

In terms of materiality, and in keeping with the rural nature of the place, the chosen materials are simple and hard-wearing, with screed decks, aluminium windows and reveals, natural stone finish in the bathrooms, and natural cork floors throughout the rest of the house.