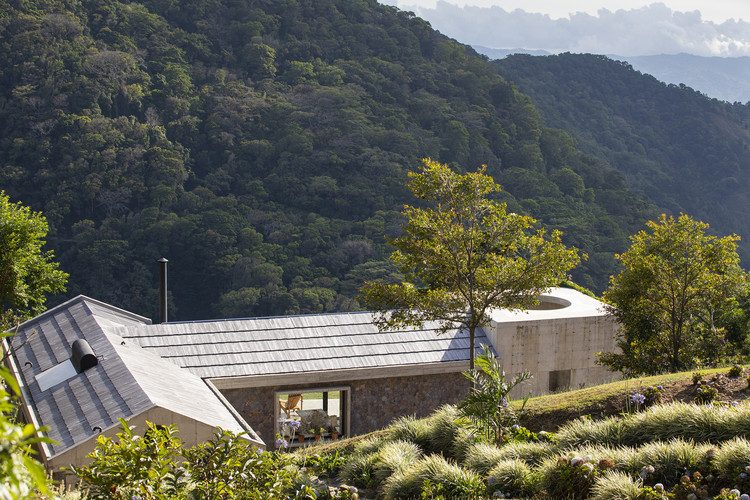 Text description provided by the architects. Nestled on the remote mountains of Palmichal de Acosta, Costa Rica, and surrounded by cloud forest, lies Casa Salvaje, a brutalist tropical haven. The house is 100% OFF-the-grid and relies on solar energy for power and on spring water captured uphill on the property. The architect's intent for this project was to frame the surrounding nature and capture the cosmic energies of such a privileged site. The materials for the house were carefully chosen to age well in the grueling elements of the tropics, but also to blend with the landscape. However, the pure geometrical shapes of the design, create the desired contrast between the architecture and the natural surroundings.

The house is entered through a poured concrete geometric space, that we call the 'vortex'. Healing crystals were incrusted on the concrete floor, right beneath the circular sky opening, in order to capture moonlight, sunlight, rain, and celestial phenomena. These energies are then passed on to every visitor as they enter the house. The vortex has another circular opening to frame the mountain which is the focal point as you walk in, and the space doubles as a greenhouse for ferns, mountain orchids, and other endemic species. A vortex is a place of contemplation and stillness, where meditation sessions or intimate dinners with deep conversations can take place. The concrete walls were stamped with leaves found on site, while the exterior of the vortex is completely wrapped by vegetation, in an intent not only to merge indoor/outdoor but to overlap it.

The construction site presented huge challenges because of its remote location and steep and narrow dirt roads, which made it vital to work with local materials.  The interiors of the house are covered entirely from floor to ceiling in a local wood called "roble coral" as if walking into a wooden womb. Local stone was used on some exterior walls, and the wood-shingled roof was hand-made on-site with Costa Rican teak. The interior design was the work of Ileana Guerrero, whose use of handmade elements, local handicrafts, and eclectic pieces is a reflection of the client's sensibility. The landscape, by Jorge Salgado, was designed as an edible and medicinal garden, with spring water pools and endemic species.

With a geometrical purity and artisanal craftmanship, Casa Salvaje encompasses many of the architect's design intents and philosophy: My work aims to reinterpret ancestral building traditions and support local economies while delivering projects of essential simplicity and cultural consciousness that reflect the dweller's spirit as well. One of my main intentions is to create spaces that will benefit and expand its inhabitants emotionally and spiritually just as much as it does aesthetically. In every project, I strive to provide at least one space that promotes a transcendental experience outside of the mere functionality of spaces for everyday life. In Casa Salvaje, I believe many of these concerns were met. 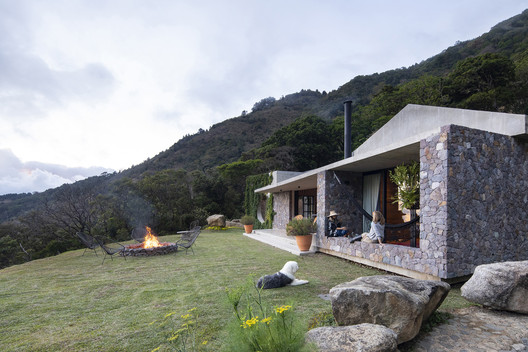