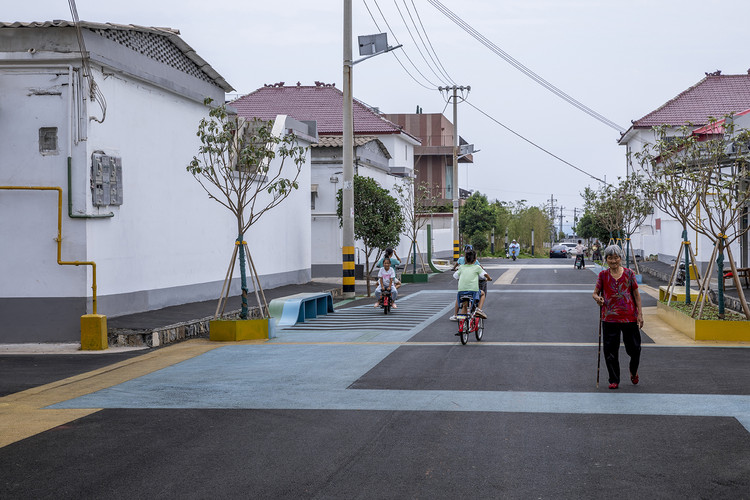 Background and original appearance: rural revitalization led by aesthetics and a three-no ordinary village. Xiuwu County is located in Jiaozuo City, Henan Province, and belongs to the north of Henan. In recent years, Xiuwu County has vigorously advocated the path of rural revitalization led by aesthetics and has achieved remarkable results. Zaiwan Village is a typical plain village, which belongs to Qixian Town. The whole village was relocated in the 1960s, and the spatial structure was in the shape of fish bone, without historical buildings. In lack of landscape, the village's west side is close to the national highway, and the hills on the East belong to military zone forbidden from entering. The village has no cultivated land or collective economy. Villagers are not poor who work either in the service industry at the Yuntai Mountain scenic spot or in nearby mines, but they lack endogenous power in the long run. Facing such a "three-no" village (no scenery, no style, and features, no industry), how to improve it is a difficult problem: not only not to conform to conventional pattern of simple painting and plastering, but also to give the village new personality within the limited cost.

Title elaboration: Museum of Living Style of the North Henan Folk Residence of the Past 40 Years Since the Reform and Opening-up. The architect found that the characteristics of the division of historic periods of the village houses were clear and existed in the form of "slicing". In addition, there were a lot of traces of spontaneous construction, such as colored steel shed and photovoltaic board, which makes the village appear chaotic but real, which is a living specimen of the changes of the residential buildings in Northern Henan in recent 40 years. If read from a deeper level, you will find that these marks also reflect the people's spontaneous pursuit of a better life after the Reform and Opening-up, and the actual actions of the party and the government to improve the people's life. This project just hopes to sort out and enlarge the sample construction through aesthetic design, so as to make it clear and systematic.

Planning and design conception: point-line-plane structure and the implementation path. The planning and design is divided into several steps: first, the village texture and self-built traces are preserved to form the fundamental plane of the living museum. Then, the environmental health, village roads, spaces before and behind the houses, village lighting, and so on are promoted as a whole, so as to provide better living conditions for the villagers. After that, a boutique visiting route and space nodes are created. The improvement of village infrastructure includes: white cement pavements changed to black asphalt pavement, greening increased, weak current cables buried into the ground, original street lamps replaced with photovoltaic ones, walls of bare houses treated, and the sewer pipes dredged and hidden.

The boutique visiting route is a "time axis", which connects the construction behaviors of Zaiwan Village in the past 40 years. For the roads and walls, the design applies artistic treatment. And street furniture and game devices are added so that it becomes the main site for villagers' public life. In the important positions, space nodes are added, including: Gallery of North Henan Folk Residence, village marker, elevation transformation of the village health center, art device of Spring Blossoms, Square of Double Happiness and Pisces, etc. They form a node sequence with the village committee in the southern part.

Narrative landscape and public art: improving the space quality by means of public art and landscape, with emphasis on narrative expression. The new designed landscape and public art have strong narrative characteristics, which provide clues for reading this special museum and can be divided into four categories: pavement, wall, installation and street furniture. The main north-south street is composed of three color strip graphics, yellow for a gas pipeline, green for the weak current line, and blue for sewer pipeline, and together with explanatory text, the artistic narration of main street pavement is constructed. The design is based on the following: the "scars" left by the pipelines laying on the pavement many times. The architect believes that these scars record the construction process, and can be transformed into graphic expression and form a special text. Street furniture is not only functional, but also the continuation of the pavement narrative, which is also in blue, green, and yellow, and is connected with the ground color strips. The streets and lanes are relatively relaxed, and children's paintings are selected, and there are also games loved by children, such as hopscotch and mazes. They provide a place for children in the village.

The paintings on walls also emphasize artistic narration and interest. For example, as for the wall drawing of street lights, the architect found that there are many street lights in the village that protruded from the external walls of the building. So the theme of light and pole is drawn in the corresponding position, suggesting the event of building insulation was added to cover the light pole. In the middle of the main street, a set of game devices are installed. Instead of high-tech and expensive materials, it's been a simple set of pipes and microphones. It is the continuation and artistic expression of the village infrastructure pipelines. The new device is connected with wall drawings, original pipelines, and color belt patterns painted on the ground form the three-dimensional space narrative of wall and ground.

Spatial nodes: stress in overall promotion and carrier of public activities. Under the premise of the overall improvement of the village environment, the architect also set up nodes in important positions, which are also the main carriers of the village public activities in the future. The village marker, located on the west side of Zaiwan Village, between the health center and the Gallery of the North Henan Folk Residence, can be seen from the national highway. The architect designed the village marker into a group of columns with different heights, which represents the development of Zaiwan Village is booming and rising. On the columns is a chronicle of events of the village, such as the founding of the village, school building, and other important moments.

The Gallery is transformed from two courtyards. The architect opened the courtyard and reserved three old buildings in the site, as the representatives of the folk residence in the 1960s. On this basis, the streamline is re-sorted out and new buildings, entrance porches, corridors, and outdoor rest space are added. The facade of the building is in the language of a combination of red brick and black steel plate. The red brick is consistent with the courtyard materials of the 1960s nearby, and the metal plate indicates the contemporaneity. The elevation emphasizes the horizontal lines, which are flat and not noisy, but the plasticity of bricks is used in detail to form changes.

The main entrance is located in the courtyard on the west side, where the audience needs to enter circuitously. The main room and wing rooms are reserved with proper repair and use as an exhibition hall. The main room on the north side in the east courtyard is retained, with a new building added to the south. Its functions are a coffee bar, tea room, and cultural and creative products display and sale. The old and new buildings are in a state of the opposite view and connected by the corridor on the west side. The old buildings keep the original rammed earth while the new buildings are red-bricked, and the traffic space is of black steel plates. The architect intends to make some positions form gaps. On the one hand, the conflict between the old and the new materials is avoided, and on the other hand, the dramatic role of light in space is strengthened.

In the interior layout, the old buildings are used as exhibition halls, the original space pattern is preserved, and the historical features are properly restored to reproduce the indoor life scenes in Northern Henan. As a leisure and sales function, the new building provides visitors with space for rest and exchange.

The Spring Blossoms are a landscape art device, which is completed by the original Chinese toon tree in the village. The Chinese toon is located at the corner of the planned L-shaped boutique route, which is the starting point of the landscape of the north-south main street. The meaning of the device represents the beginning of Reform and Opening-up: spring returns to the earth, and everything recovers. The Square of Double Happiness and Pisces is located in the middle of the main street, which was originally collective land where villagers planted vegetables. There is a substation and a grocery booth between the vegetable field and the streets. The architect transformed this place into a small square in the village for villagers' daily leisure use.

First, the site is hardened to make it more suitable for the function of the square, then a notice board is added at one corner of the square and a rest platform at the other corner. Between the square and the main street, a new convenience service point is built to receive express delivery and a small sales department. The original substation on the site could not be relocated. The architect changed the exposed substation facilities into a safer box transformer and incorporated it into the building, which is integrated with the convenience service point. The service point is a trapezoidal in-plane, with a wooden structure and a single slope top. The southwest corner of the roof is higher and the northeast corner lower. The architect uses the glazed tiles and facade of the roof to combine the "Double Happiness" and the Pisces patterns, representing the villagers' good wishes for life.

Conclusion: a try to provide a sample of space promotion for ordinary villages. Villages like Zaiwan Village exist in quantity in Xiuwu County and even in the whole of China. They have no special scenery, no historical features, no significant industries, namely just ordinary villages with ordinary people and ordinary life. How to design them is a proposition that every architect who engages in rural construction needs to think about. In Zaiwan Village, the design team was fortunate to find the theme of the Museum of Living Style of the North Henan Folk Residence of the Past 40 Years Since the Reform and Opening-up. On the basis of retaining the original texture, real rural landscape, and spontaneous construction traces, the design team connected, enlarged, and interpreted the village in the way of architecture, landscape, public art, and narration. It is a kind of sneaking and also a kind of ingenuity. I hope it can provide a reference for the revitalization of such ordinary villages in China.­­­­­­­­­­ 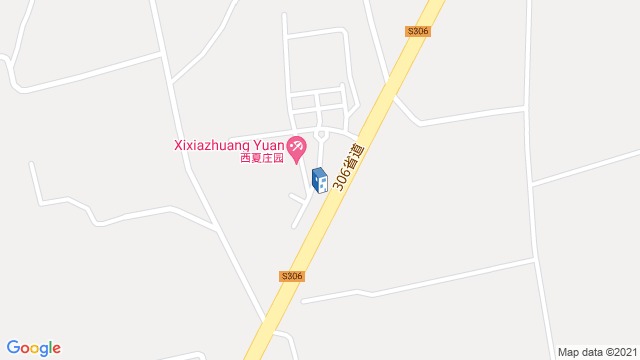 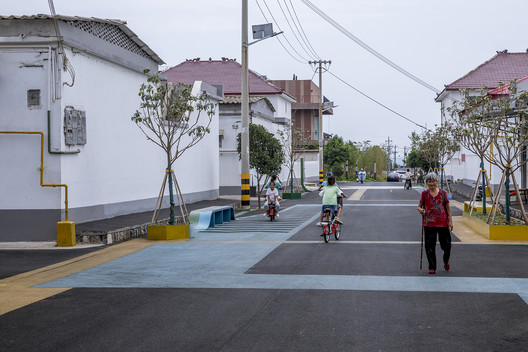