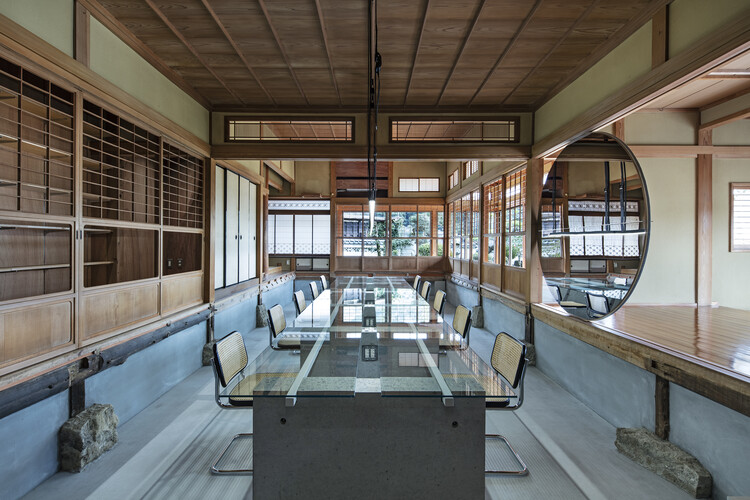 Text description provided by the architects. The office of the Hasami pottery brand Maruhiro is a project to renovate an 86-year-old Japanese house located just behind "Hiroppa", a complex project including a park and directly-managed store currently under planning at DDAA.

Hasami pottery is a local industry in Hasami, Nagasaki Prefecture.By adding the park a function of directly-managed store, Hiroppa is planned as a plaza for not only customers but also local people. In an old house adjacent to the park, a showroom, a kitchen for making lunch boxes to eat in the park, and residence space for collaboration with artists were created in addition to office functions.

When this project was just starting, the COVID-19 calamity was spreading worldwide, but the client decided to continue the project since the park project, which is for outdoor use, would be beneficial even under post-COVID conditions. However, as the future is unpredictable, it is very important to be flexible in terms of organization management. Therefore, DDAA proposed what they could do with half of the original budget. The goal was to boldly change the impression of the existing one with as little modification as possible and also to create a space that is not fixed in function or concept.

Japanese Wooden houses are designed to allow for flexible and repeated expansion and renovation in the first place. It can be said that one of the characteristics of Japanese housing is that it does not peak at the time of completion, but can gradually change its appearance according to the situation. This Japanese house was no exception and the kitchen, warehouse, entrance, and so on had been extended.

DDAA proposed to make as few changes as possible to the existing conditions and to remove the floor from the room where the tatami mats were laid. The floor was removed and concrete was poured, leaving the magnificent stone plinth foundation that appeared. Along with the concrete floor, the legs of the desk at the height of the original floor were provided also in concrete.

Using a chair often cause damage to the tatami, but removing the tatami solved the problem, and at the same time, the ceiling height was raised as the floor was lowered. All the paper and glass were removed from the yukimi-shoji screens (lattice frame with translucent paper on top and glass on the lower part so that you could look out at the garden when sitting on tatami mats). Since the floor has been lowered, the garden is at eye level when sitting on a chair. The tokonoma (Japanese alcove, which is often decorated with hanging scrolls and other art piece), which came to a relatively high position, also suits the gaze of modern life, where we often sit in chairs. A rolling round mirrored door that also serves as a sign for the entrance was installed on the existing shoji frame.

On the second floor, tatami mats were replaced with wooden boards to create a residence space for artists. The wall below the nageshi (decorative material that connects columns horizontally) is covered with the same lauan plywood as the floor, and no additional work has been done above that. By slightly changing its relationship, the original meaning can be altered. We believe that this is an effective way to utilize existing stock, such as vacant houses. After completion, plans to use it not only as an office, but also as a tea shop adjacent to the park, a pop-up store, and a rental space have immediately surfaced. 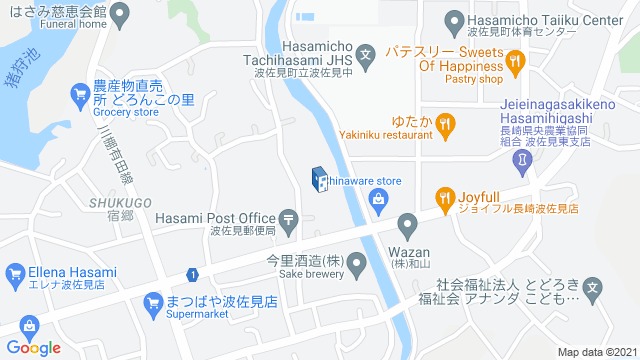 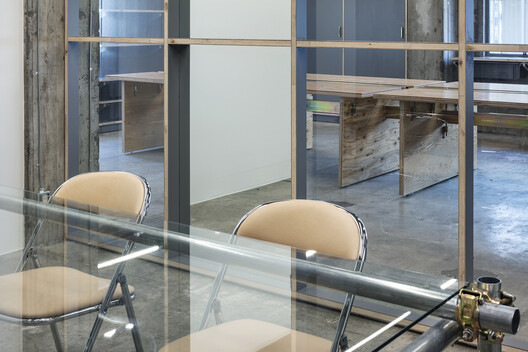 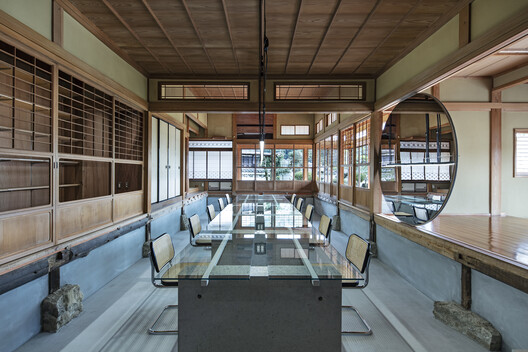