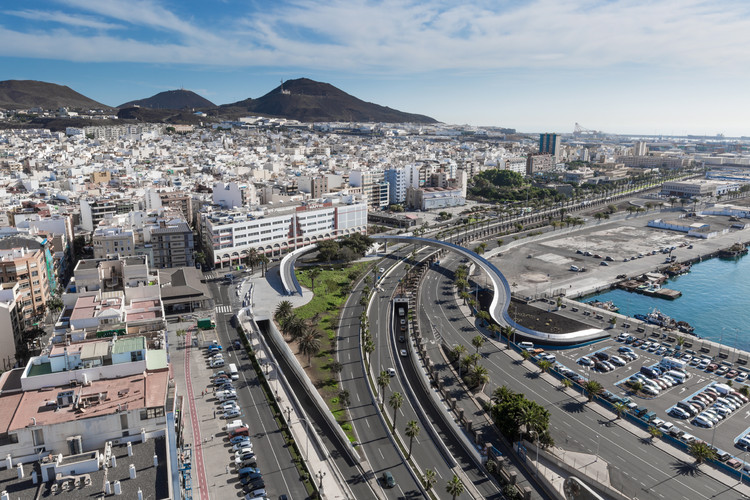 Text description provided by the architects. With the goal to open up to its waterfront and develop it for recreational and leisure usage, the city of Las Palmas de Gran Canaria established the urban strategy of reconnecting Las Canteras beach with the Sanapu dock through a pedestrian bridge.

This new footbridge connects the two shores of an isthmus whose sides were so close that their tides used to cross over from side to side. Over the years, land reclamation from the sea due to urban development has progressively distanced them away and more recently a high-speed highway has created a physical barrier that put them apart definitively. Now, the city of Las Palmas de Gran Canaria, a modern and cosmopolitan city, has completed this ambitious and comprehensive development plan with a new architectural icon, the Onda Atlántica bridge. With a total length of 283 meters, the bridge includes three 63 meters spans without intermediate supports. Its undulating shape, resulting from landing space constraints, helped preserve the existing trees and allowed the structure to avoid expansion joints.

Its V-shaped profile makes it looks as if it were two-dimensional, just like a curved sheet of paper. Denoting a surprising lightness, the bridge spans over public spaces without any apparent tectonic effort. This profile, which has reminiscences of the hull of a ship, is in fact the result of the need to mitigate the acoustic impact of the highway underneath, it also allows to open up to the views above and for natural light to illuminate the entire path. This resulted in a highly innovative structural system, an extremely efficient triangular shape not common in the world of civil engineering, capable of bridging the required curved distances with a great performative agenda and a minimalistic aesthetic.

It was designed as a unique gesture, capable of solving all the programmatic needs including pedestrians, cyclists, and accessible traffic with a single infrastructure, thus avoiding differentiated elements such as stairs and auxiliary elevators. Crossing the bridge becomes a new experience for its visitors as it acts as a traveling movie camera revealing different angles of the city due to its variable path, and its constant section becoming the still frame that shows a moving city behind.

The bridge becomes a large urban sculpture that could perfectly fit within the land-art movement as it uses the landscape to portrait its full reading appearing to penetrate both plazas at the landings, even continuing underneath them. Two side wings fold up as metallic origami planes, suggesting arms that invite you to enter between them.

Two public spaces have been redesigned to accommodate the footbridge landings. On one side, a fluid plaza receives all the converging pedestrian traffic with green undulating shapes designed to be seen from above turning it into a horizontal vegetal painting. On the other side, a non-walkable landscape design reproduces a volcanic topography reclaiming rocks from the neighboring Isleta mountain. 3 meters wide and a maximum slope of 6%, the floor level of this footbridge reaches a maximum height of 7.60 meters above street level becoming a new viewing point for the city. It also allows a minimum gauge at the highway of 5.50m, exceeding up to 6 meters at some points.

The architects developed a structural scheme inspired from naval engineering designs, adopting a system of ribs or frames arranged every 3.2 meters while tied-up by 10-12mm steel plates. The 18 pieces that made up the final structure, weighting up to 40 tons a piece, where assembled at a metallurgical shop in Seville to be then transported by ship to the site. All the components that conform this footbridge have an structural performance  - except for the handrails, resulting into a very efficient and sturdy design. A 3 layer-paint with metallic finish helps, depending on daylight, to fade within the city and ensure protection against the highly corrosive maritime surroundings. 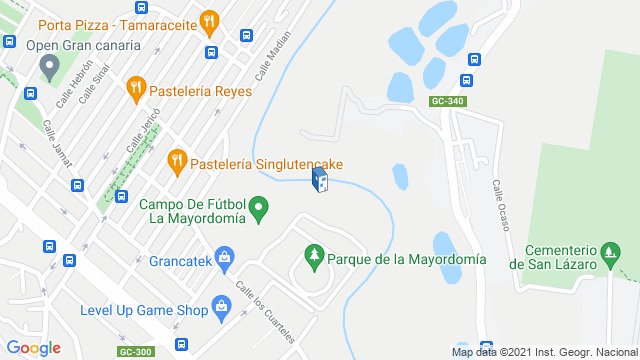 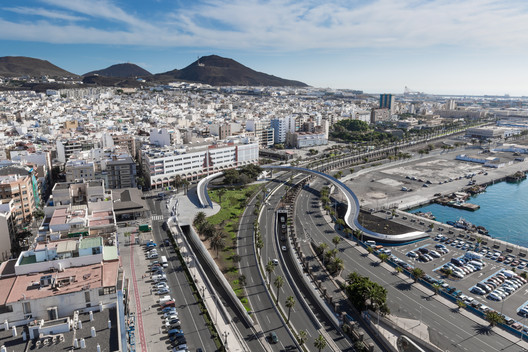