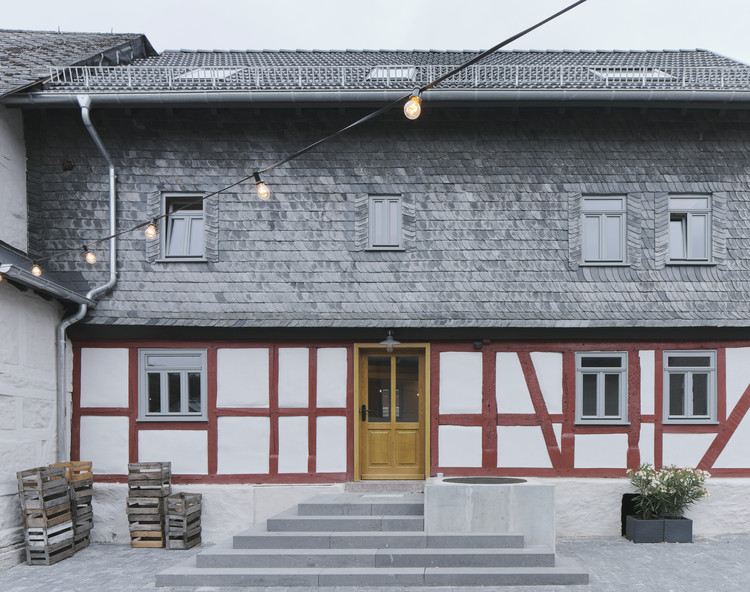 Text description provided by the architects. The dilapidated three-sided courtyard, consisting of four buildings formerly used as a residential house, workshop with a pigsty, barn, and remise, is located in rural Hainau. It was built by its namesake Wendenius at the end of the 18th century. The concept for the ensemble was quickly determined, the buildings were brought back to life through extensive renovation and converted into a holiday home with an event barn.

During the implementation, special emphasis was placed on the use of ecological and sustainable building materials such as clay, reed, slate, linseed oil, and softwood fiber. The dilapidated building structure of the ensemble was tackled from the ground up and renovated in accordance with the local directives for the preservation of historical monuments.

Guesthouse. The former residential building was heavily marked by typical renovations from the 60s to 90s. The rooms were dark, cramped, and musty. After exposing the building structure the picture became even more frightening. However, there were also positive surprises. Historical wall paintings were found under wallpapers and thick paintwork throughout the entire house. These were restored through painstaking detail work. A walled-in historical window turned out to be the template for the new wooden windows that were made by the carpenter. The over-rafter insulation was designed and detailed in such a way as to preserve the elegance of the historical roof structure. Not only should the structure be hidden from the outside, more importantly, but the filigree proportions of the original roof were also to be preserved.

Dining house. The original building was divided into two parts, housing a workshop and a pigsty. Walls and ceiling elements were removed in order to create a single spacious room continuum. The kitchen was installed in the area of the former pigsty and is now surrounded by a circumferential U-shaped concrete wall. The concrete wall serves four functions: It is a ring anchor, girder, sealant and contains heating elements. Through a core activation, the entire interior of the building is centrally supplied with pleasant radiant heat through the concrete wall. The exposed concrete staircase is hollow within and contains the building technology.

The listed windows have been extensively renovated. Further openings were provided with fixed glazing and an external wooden frame. The facade was completely stripped of the old plaster to reveal the entire building structure and received a historical natural stone mud wash in light white-gray. Without adding an independent design aesthetic to the building, the aim was that restrained interventions should underline its aesthetics. The design concept consists of a contemporary interpretation of the material. The materials used are just as simple and functional in their coloring and texture as those of the existing building. By "freezing" the existing building in white-gray tones, a harmony of old and new is created in equal measure.

Barn. Converting the old barn into an event location was a major technical challenge. The requirements for structure, sound insulation, and fire protection turned out to be enormous. Precisely because the existing building was simply not suitable for this kind of usage at first glance. The foundation had to be completely renewed in small steps along a set grid (every 1.25 m). The existing roof was replaced with an enforced soundproof roof. In order to comply with the noise protection regulations, soundproof walls made of wood had to be placed in front of the outer walls inside the space. Even the windows and the barn door received special sound-insulating glazing. Thus only a thin outer skin remained of the existing building. In contrast to the half-timbered facade, the new interior has a restrained and neutral design.

Remise. The pellet heating and the sanitary area were planned on the ground floor of the remise. A generous play area for children was created on the floor above, incorporating a pool table and a climbing wall. 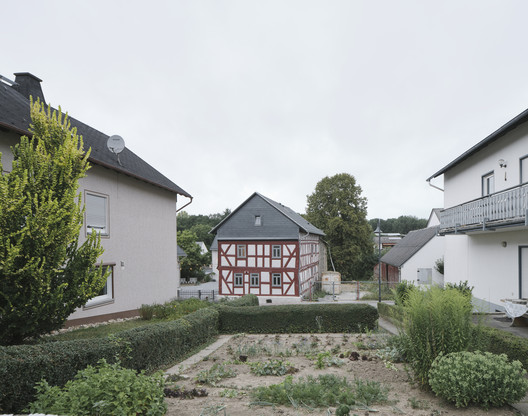 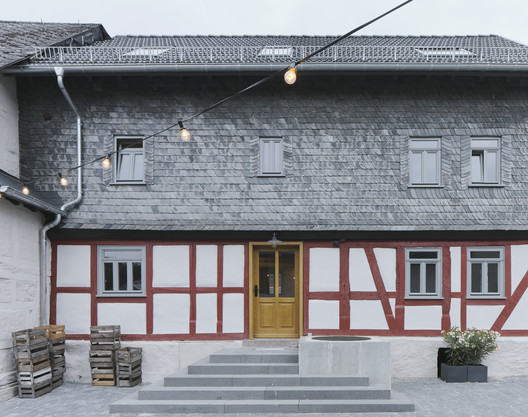