Aedas has unveiled the design for a tourist leisure resort that takes the form of an organically-spaced 266-meter tower in the harbour city of Zhanjiang. Located at the intersection of three distinct urban areas, the Zhanjiang Yun Hai No. 1 Tower becomes a portal for the city and a symbol of its development. With a tower design inspired by the motion of koi fish, and a podium echoing the shape of waves, the project creates an allegory of Zhanjiang’s harbour culture. 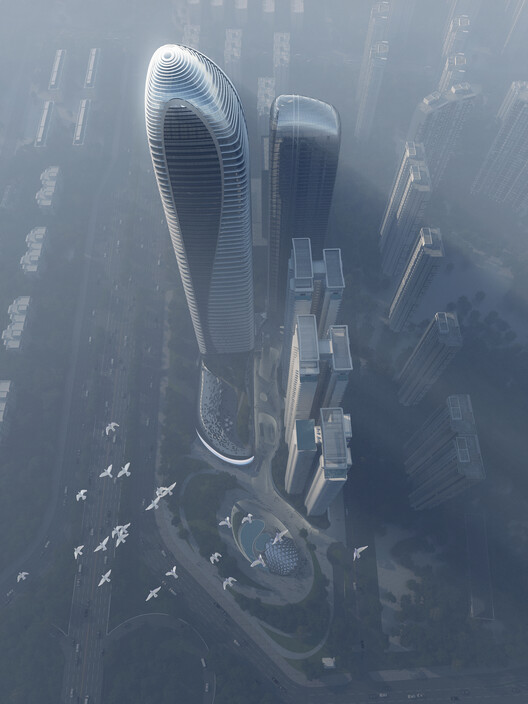 Responding to the city’s growing allure as a tourist destination, the project, set to become the tallest building in the area, provides an “all-weather” tourist resort overlooking the sea promenade. The design comprises a high-rise building containing a hotel and serviced apartments, as well as three residential towers facing the sea. The podium is an assemblage of leisure amenities and public spaces that serve both the towers and the surrounding urban context.

The project capitalises on extensive public spaces through retail streets and leisure squares. The latter debut on the eastern end of the site with a stepped landscaped lawn that advances toward a sunken plaza, which leads to the indoor commercial spaces. The series of public spaces also contains a market area, which would serve as a hub for cultural activities. The leisure amenities also feature an outdoor infinity pool and a restaurant at the top of the tower.

The commercial podium contains a digital art installation along its eastern facade, which shapes the interaction between the users and the architecture. The façade can be transformed into a lighting stage to accommodate festivals and create an immersive experience. As expressed by Yi Jun Qian, Aedas Executive Director, the project aims to blur the boundaries between interior and outdoor spaces, with a vision “to create a space where all these elements could coexist to generate interesting experiences”.